The Ballet Of Dr. Caligari and Madder Mysteries 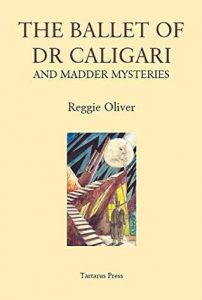 Lovers of dark fiction will welcome with enthusiasm a new collection by Reggie Oliver,by far one
of the very best living authors in that genre. The present,elegant volume from Tartarus Press
reprints six stories previously appeared in the elusive and by now practically unobtainable
collection Madder Mysteries ( Occidente Press, 2009) and seven,more recent stories published in
various, different venues.
“A Donkey at the Mysteries”is a learned tale set in Greece and full of references to Greek
mythology, conveying a subtle feeling of horror, while “The Head” is a splendid story describing
the fatal bond between an elderly art critic and a smart chaffeur.
In the brilliant “Tawny” idle gossip eventually turns into a gory tragedy and in the most enjoyable
“The Devil’s Funeral”, a long piece in the tradition of MR James, supernatural evil lurks behind the
sodomite relationship between two clergymen . “ The Game of Bear” is actually a posthumous
collaboration with James himself, whose unfinished manuscript ( featuring an obnoxious woman
who, dispossesed of an inheritance, seeks and finds revenge in life and death) has been
completed by Oliver with a remarkable adherence to the master’s style.
In the delightful “Baskerville Midgets” a group of disquieting midgets brings tragedy and death in
a respectable boarding house for actors.
An actor and a playwright,Oliver often sets his fictional work in the world of theater. In the current
volume readers will find “ The Final Stage” ( formerly published under the telltale title “ An Actor’s
Nightmare”) describing in a vivid and detailed fashion a young actor’s obsessions and “ The
Vampyre Trap”, an engrossing, superb mystery told in a riveting narrative style
“ The Endless Corridor” is a labirinthine, disturbing tale where the obsession of a late writer for
mirrors ends up affecting the scholar researching his work and his life, while “Porson’s Piece” is a
fine supernatural story featuring a retired professor and philosopher compelled to deal with
unexplained phenomena and “Lady with a Rose” a solid, fascinating piece where the enigmatic
portrait of a vicious woman hides embarrassing family secrets.
The title story “The Ballet of Dr Caligari” is a puzzling,atmospheric piece with slight
reminescenses of Aickman and Pirandello, depicting a young composer trapped in an unusual
and dangerous task.
Graced by exquisite illustrations drawn by Oliver himself, the book is a real treat for any fan of
great fiction.