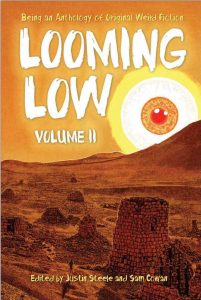 Here’s yet another example of how most horror anthologies appear to be today.

An excessive number of stories ( the e-format makes it easier to squeeze into the book a lot of tales) some of which quite worth reading while the majority just forgettable fillers unable to impress, entertain, let alone disquiet the reader even for a single minute.

In this respect the present anthology (including  twenty-two contributions) is slightly better than the average of the similar short story collections continuously appearing in the market.

The good stories are indeed excellent and I’m more than happy to mention them.

“To The Progeny Forsaken” by Gwendolyn Kiste is the vivid, unsettling portrait of a young girl endowed with a very dangerous power, while the puzzling but enticing “Ex Astris,” penned by Erica Ruppert, depicts the events taking place after the inexplicable disappearance of a young woman.

The unusual, insightful “Across the Darkness” by SP Miskowski  effectively addresses the darker side of the social media.

To me the best tale in the book is “Still Packed” by Simon Strantzas, a splendid piece of psychological horror portraying the paranoid behavior of a woman torn between a husband she doesn’t love, an occasional lover and a reality she doesn’t understand anymore.