Best of the Best Horror of the Year – Book Review 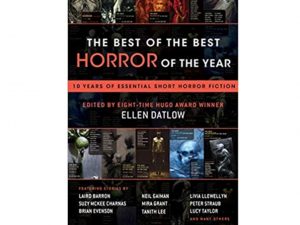 Ellen Datlow is arguably the most famous editor of horror story anthologies in the world.

For twenty-one years she has edited the horror moiety of The Year’s Best Fantasy and Horror, and when the series was discontinued she started The Best Horror of the Year, of which by now she has edited ten volumes. The current anthology collects twenty-five of her favorite stories that previously appeared in the first ten volumes of that ongoing series.

The Best of the Best from the Best of the editors… What a reviewer can add, then? Would anyone dare to argue with the taste and the experience of such an editor? Not at all.

Truth be told, I do agree with the majority of her choices; however, as it’s only natural, I don’t completely share her enthusiasm for some of the included material. Don’t get me wrong: ALL the stories in the volume are good as expected, but some appear to be more accomplished than others. So, as a reader (and a reviewer) I shall point out which stories, to me, are the best from Best of the Best (no pun intended).

Here then are my personal Best:

“Better You Believe” by Carole Johnstone, a truly outstanding, breathtaking tale where horror is generated by the cruel power of the high mountains, making a gradual massacre of a group of climbers. A very gripping and thrilling piece with the author in full control of her narrative.

Lucy Taylor’s “Wingless Beasts,” an enticing modern Western featuring a lonely killer who gets his final punishment in an unexpected way.

“The Nimble Men” by Glen Hirshberg, a weird but fascinating story about strange phenomena experienced by the pilots of a small airplane landed in a small Canadian airport.

“Down to a Sunless Sea,” a short but deeply unsettling tale by Neil Gaiman, revealing the secrets surrounding a sea tragedy.

Laird Barron’s “In a Cavern, in a Canyon,” a superb story depicting a subtle, ominous type of hidden vampirism.

“The Moraine” by Simon Bestwick, a phenomenal tale of terror, frightening and intense, where a couple of hikers get lost in the fog and have to face an inexplicable, inhuman horror.

“Shepherd’s Business” by Stephen Gallagher, an extraordinary piece of fiction following the steps of a newly appointed physician in a secluded, rural island, provides evidence that true horror doesn’t need monsters and spookies, but hides inside the human heart.

And now horror readers and fellow reviewers, just take your own pick, but don’t miss this book for any reason!