Advance Review: THE GHOSTS OF WHO YOU WERE 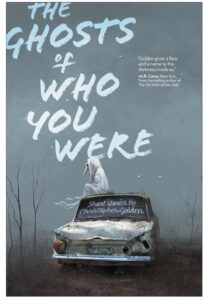 The Ghosts of Who You Were
Christopher Golden
Haverhill House Publishing (October 12, 2021)
Reviewed by Mario Guslandi

In his introduction to the volume, Golden contends that he’s not a short story writer, but a novelist.

Truth be told, he’s actually the author of many successful novels, such as

The Boys are Back in Town, Snowblind, and Red Hands, just to mention a few examples from his huge bibliography. However, the present collection, which assembles ten tales and a novella, proves beyond doubt that he’s also an excellent writer of dark short fiction.

Among the included stories, allow me to mention my own favorites:

“The Abduction Door” is an excellent example of surrealistic horror, revolving around a puzzling, dangerous door appearing inside an elevator, while “The Curious Allure of the Sea” is the vivid portrait of a stressed woman whose father was mysteriously lost at sea.

In the grim “Wendy, Darling,” inspired by a popular folk ballad, an unworthy bride is haunted by some ghostly kids right at the wedding site, while in the quite enjoyable “It’s a Wonderful Knife,” a famous movie producer, known for his predatory attitude towards young and attractive girls, gets his punishment at the hands of a vindictive woman.

“The Bad Hour” is a strong horror story depicting the terrible follow-up to the Iraq war for two veterans back at home.

Even if Golden disagrees, we’re looking forward to more short stories from his pen.