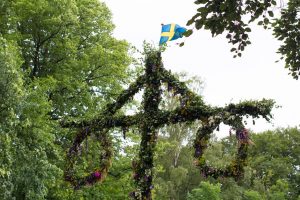 Image by Håkan Dahlström / CC BY 2.0
Caption: All is not what it seems around the Midsommar maypole.

Director Ari Aster calls his new movie, Midsommar, a “bleak adult fairytale” with “generous amounts of psychedelia,” and he doesn’t disappoint. This strange psychological thriller is not a horror movie as such, although it is horrific at times. But there are few jump scares, no disturbing dolls or creepy kids and no CGI monsters.

With the cult classic Hereditary already under his belt, Aster has already established himself as such a master of the psychological thriller that you would not want to call him out at the poker table for bluffing. “I like to soak in dread,” he explains. “It’s ideas that frighten me, not jump scares. They’re not what you carry home, what fester in your brain afterward.” And fester, Midsommar will.

Part of what makes the film so disturbing is the near-constant daylight of the Swedish summer. Far from the dark shadows and dimly lit rooms of your average horror film, this takes place in bright sunshine surrounded by idyllic scenery. Similarly, the cast wears bright white, flowery robes and wide, warm smiles. It appears to be Nirvana, but it is far from it.

The story follows four friends who will all be familiar faces: Florence Pugh (Fighting with My Family, Lady Macbeth), Jack Reynor (the stoner big brother in Sing Street), Will Poulter (almost everything these days) and William Jackson Harper (Chidi from TV’s The Good Place). The boys plan a trip to the midsummer festival when a family tragedy befalls a girlfriend of one of the group members who then ends up tagging along on their trip to visiting student Vilhelm Blomgren’s homeland. 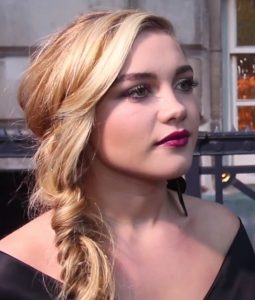 Image by wizardradiomedia / CC BY 3.0
Caption: Is the whole film a figment of Florence Pugh’s imagination?

All appears bucolic at first, as they reach the land of eternal daylight, being greeted by friendly villagers who welcome them with open arms. Little do they know of the hidden agenda behind the smiles and the madness that is to come. It’s as much a slow burner for them as it is for us.

Despite the stunning location, Aster goes all out to disorientate us from the start. A camera flip puts the road in the sky en route to the festival. Roofs of the wooden cabins are at disturbingly odd angles when they arrive. It’s not quite quiet-bang-horror, this is the creeping, gnawing feeling of impending doom that Aster wants you to take home, festering in your brain.

Anyone who has watched the trailer will know that things do not stay relaxed and rural for long. Soon enough, the odd ceremonies start to get stranger, and then stranger, helped along in no