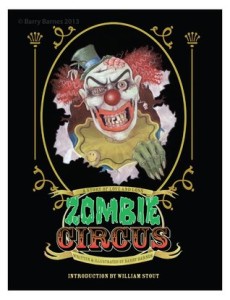 10 years in the making, Zombie Circus is, as the publisher states, “an illustrated children’s book for adults”. Written and illustrated by Barry Barnes, it’s an eye-catching little hardcover containing a very short story (about 10 pages, including William Stout’s introduction), and over 20 full-page illustrations (some in black and white, some in color).

Flipping through the pages, the design brought to mind Brian Selznick’s The Invention of Hugo Cabret, itself a novel/picture book hybrid. If you’ve read that one, you’ll have a good idea of what to expect here. The moody, circus-themed artwork fits perfectly with the story’s tone, and will instantly draw you in. As for the tone, despite the tongue-in-cheek warning at the beginning of the book (“A registered nurse will be standing by for all our faint hearted patrons”), this isn’t at all what I’d expected. It’s a story that evokes melancholy far more than disgust.

As the story begins, a booze-addled former ringmaster dreams of his star performer, a woman he’s been pining for since her departure from the circus years before. Upon waking he receives news of her untimely death, and sets out to finally reunite with her.

Given how short the book is, I won’t give too much away here. Suffice it to say, the story as a whole is fraught with yearning, slick with the shadow of a love doomed to disappointment. The atmosphere of the essentially dead circus is at once rueful and darkly wondrous.

It goes without saying that, as far as the horror fanbase goes, this is the kind of book that falls into a niche within a niche. If the concept piques your interest at all, though, I very much recommend picking this one up.