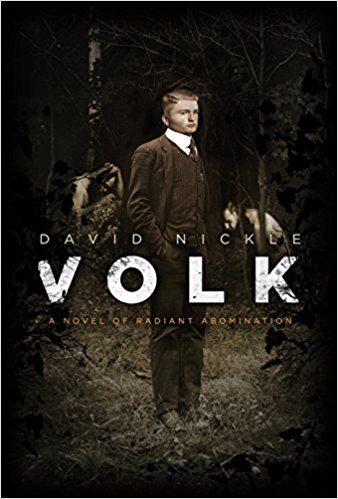 When a monster that can cloud men’s minds is loose in 1930s Europe, whom can you trust? Not the Nazis, that’s for sure.

It’s 1931, and the Nazis have a secret plan to harness the perception-altering powers of a parasitic monster known as the Juke. Having survived a previous encounter with a Juke twenty years prior, former World War I flying ace Jason Thorn is unwittingly drawn into the Nazi plot when a mysterious and powerful man known only as “Orlock” derails their sinister experiment. With Jason in trouble, its up to his friends – including African-American expat doctor Andrew Waggoner and tough-as-nails heiress Ruth Harper – to rescue him and try to stop the Juke forever. Readers who enjoyed the first novel in the series, Eutopia: A Novel of Terrible Optimism, will be glad to catch up with the characters, as well as to find the scope of ideas and action greatly expanded.

Volk is a sequel to the novel Eutopia: A Novel of Terrible Optimism, and picks up twenty years after that story took place. Although Volk delivers enough backstory to be understood on its own, many of its pleasures come from seeing how the characters’ relationships have changed, as well as piecing together the various events that occurred during the gap between books. Moreover, Volk recontextualizes and questions a number of prior assumptions or points of view from events in the first novel, so without that background, readers may be missing the full effect.

That’s not to say that all of Volk’s strengths are derived from its relation to Eutopia. Volk takes up the challenge of sequels to deliver more of everything, and succeeds admirably. Volk opens up the scope of the first novel considerably: Characters cross pre-WWII Europe in planes, trains, and even a crashing automobile. The Juke, which was previously shrouded in mystery and illusions, is fully exposed, yet a new antagonist – more dangerous than either the Juke or the Nazis – is introduced. Oh, and there’s plenty of action. Moreover, Volk shifts to allow the human elements to take center stage. The drama between the characters, daring international rescue missions, and political and scientific themes all come satisfyingly to forefront.

While the plot moves at a quick clip across Paris, Germany, and Belgium, one of Volk’s most interesting aspects is that it is also story about how stories help us understand the world. Because of the Juke’s ability to influence people’s perceptions of reality, our group of heroes can never be quite sure of what they have seen or even felt.  To work around this, the group relies on a method called the “Decameron System” – in which they recount their story while being questioned or corrected by the others, the idea being that by interrogating their memories, they will eventually come to a truer picture of what occurred. In the same way, the characters in Volk revisit crucial events and memories from Eutopia (as well as the period between the novels) to recontextualize those events both for themselves and the readers. In this way, Volk serves to enrich the previous novel, although the questions it raises about identity and connections have thematic resonance that any reader will appreciate.

With multiple engaging protagonists, a unique antagonist, and a well-realized pre-WWII European setting, Volk picks up the story of Juke but shifts its focus away from the literal monsters to the humans that try to control them. It’s a bold, but natural progression for the story, with an ending that hints at much more to come.