The Night Inside – Book Review 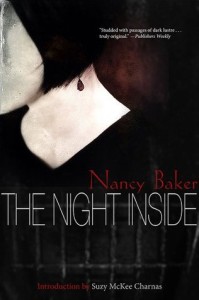 ChiZine has acquired the digital right to The Night Inside by Nancy Baker and has released it as an eBook. The first installment of Baker’s bestselling vampire trilogy was originally released in hardcover and paperback in 1994 and is currently out of print.

The Night Inside is about a grad student, Ardeth Alexander, who finds herself the unwilling blood source for a captive vampire, who is being held for an even more sinister purpose. Even our heroine’s name foreshadows her fate.

Ardeth begins the story a dependable, unassuming grad student who spends her life doing and saying the right things and toeing the line.  She’s believable in her fear and her plans to escape. Even her sympathy for the creature she is trapped with feels authentic, as they are both their captors’ physical and emotional slaves.  They bond while in captivity, and Ardeth eventually offers her blood voluntarily, telling the vampire stories of how the world has changed since he went into deep slumber. Eventually, to escape capture, she makes an irrevocable choice.

The vampire Baker created is a Gothic version of the blood drinker: Byronic, intense, elegant, deadly. Isolated by choice and by nature. He is honest with Ardeth about the life she is to face, without making her any promises, making him a strange combination of lover and deadbeat dad.

Inside is at times bleak, rife with captors that love torture and snuff films and create both.

However, within this story of incest, greed, necrophilia, and a multitude of other horrors, Baker pens some beautiful descriptions. I appreciated her ability to get at the core of what motivates her characters and lay it bare for the reader to see, no matter how disturbing that truth may be.

I also appreciated that the characters in The Night Inside change and you’re left wondering if it’s for the better. Maybe the next novel, Blood and Chrysanthemums, will provide some insights.