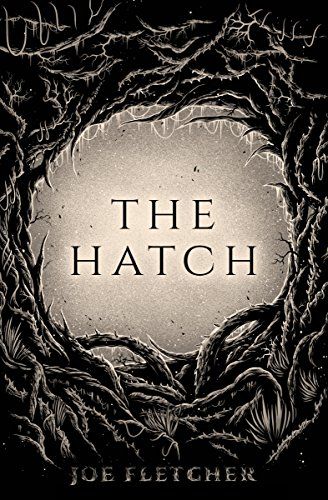 Joe Fletcher gives you his eyes, ears, nose, and senses. I mean this in a literary sense, of course. In his first full-length poetry collection The Hatch Fletcher takes us many places. Some so visceral, that one feels uncomfortable, unsure, and frightened. From international shores to ponds behind trailer parks and holes in garden walls, Fletcher’s mind runs rampant. Reading his work is like being him for a moment. No time is wasted on why. Those thoughts come later, after you’ve read a few poems and attempt to get on with your regular day. That’s when The Hatch strikes! All the little pieces of the puzzle coagulate in your head, delivering sights, sounds, and smells

The Electrical Congress in the Mountains, Rusty Squeezebox, Double Transduction –The titles of Fletcher’s poems are far from the ordinary. Some of them are spikey, others feel like silky fabric, most of them are not an exact label of the poem’s contents. This is refreshing and powerful stuff! Exactly what I want to show people who still think that all poetry is overly ornate, perfectly rhyming greeting card fodder. Stuff that is either so sickly sweet you need a shot of insulin after reading it, or buffoonish in its humor. No offense meant to greeting cards, but poetry should provoke a visceral reaction. Joe Fletcher’s poems will haunt you and make you think.

OTWAY is a nice example of Fletcher’s poetry. A man is fishing off of a funky pier in near darkness. But this is no jolly relaxing evening. There are many portents of evil, such as the child’s pink shoe bobbing in the water nearby. Grimly hanging onto his beer and cigarette, the man notes that there is a scuffle in a trailer and people are having sex in a beat up car hidden behind the bushes. Everything seems tense, waiting for something to happen. We are not disappointed. A sobbing boy wearing a wooden mask and standing in canoe that is being powered by something not visible, glides into view and lands in front the startled couple. While that is strange and disturbing enough, Fletcher fans the coals with an unexpected strike on the fishing rod just as something crashes in the trailer.

Jack Mike paints a vivid, night time surgery occurring under a tent while a storm thunders above. The surgeon is drunk and the conditions poor, but somehow the patient pulls through. When morning comes, the poor fellow leaps from his hammock and gallops off into a field. Temporarily blinded by the surgery, the man falls down and is trampled by a huge pig. So much for a speedy recovery! On life support, the patient exists in the murky territory between life and death. Until he is accidentally killed by his own daughter, who unplugs the cord while sleepwalking. How’s that for twisted horror?

Joe Fletcher’s writing is very original and has qualities that will appeal to many readers. I think that those who enjoy speculative fiction, weird tales, and dark poetry will really enjoy The Hatch! But it’s certainly not limited to just us. Anyone who’s looking for a collection of real poetry that connects solidly with readers will dig it, too. Highly recommended! A definite two thumbs up! Fletcher’s work has been featured in many journals, including: Painted Bride Quarterly, Gulf Coast, and Slope. He’s also a teacher of writing and literature at the University of North Carolina and the North Carolina prison system. If you are hungry to read more of Joe Fletcher’s writing, Brooklyn Arts Press is also the publisher of his poetry chapbook Already It Is Dusk. BAP is a cool independent publisher that has over forty titles available and is still growing. Check them out. You’ll be glad you did!