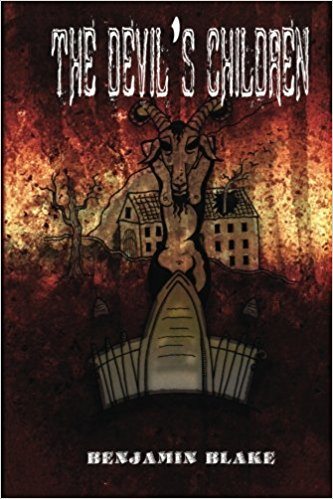 This is a fun romp of a book that should be read purely for entertainment. If you are a person who wants everything perfect and disputes a lot of what you read in speculative fiction, don’t read The Devil’s Children. However, if you’re looking for a fun tale and are willing to go on a loose and sometimes drunken demon chase, this is your baby!

The story starts out with a couple of childhood pals getting back together to re-visit their old stomping grounds. Harry and Adam are a couple of single guys who’ve kind of arrived at adulthood. They’re not dead by some divine miracle, which is nice, but they aren’t really achieving anything much with their lives. Adam’s life is pretty simple. He likes to drink a lot, play video games, and yank his yeeker. That’s about all his aspirations in life are, so I guess you could say he’s “living the dream.” One other thing Adam has going for him is rich parents. His Mom funds the entire trip that he and Harry take back to Wycombe, Massachusetts. This includes purchasing multiple used cars, renting a house, and buying a ridiculous amount of booze.

Harry is a little more mature than Adam, but not much. While he’s managed to live on his own in the world, he’s still pretty much hung up on teenage thoughts. Being able to smoke all the cigarettes you want because you’re an adult, still dreaming about his teenage crush, and fondling female fountains is how he rolls. One of the passions both guys share is demon hunting, something they used to do a lot as kids. But living separate lives away from Wycombe, they’ve given that part of themselves up. Until the funky dreams start. Weird, demon-filled dreams that include Harry’s girlfriend Rose, who disappeared under mysterious circumstances.

Somehow all this gels into our two heroes zooming back to Wycombe. They need to defend the town against bad mojo and an evil… town historian? Well, so be it. Goats, goat masks, underground tunnels, and secret rooms all make an appearance in this tale which feels like it is made of vaguely familiar parts. There’s even the gruff old diner cook and an African American sidekick who can easily whip a football jock’s ass. Flashes of Tom Sawyer, Stephen King’s It, The Goonies, a little romance, and a lot of pop culture fare have all been fed into the grinder to put together The Devil’s Children.

When I say that, I mean it in the very best way. This book is entertaining and a fun adventure of the sort that many of us would like to have. Instead we’re stuck in a cubicle, or behind a counter, or changing somebody’s oil while they sit in their car yakking on a cell phone. If you’ve ever wanted to go on a road trip with an old pal and drink too much while fighting evil, grab a copy of The Devil’s Children today!