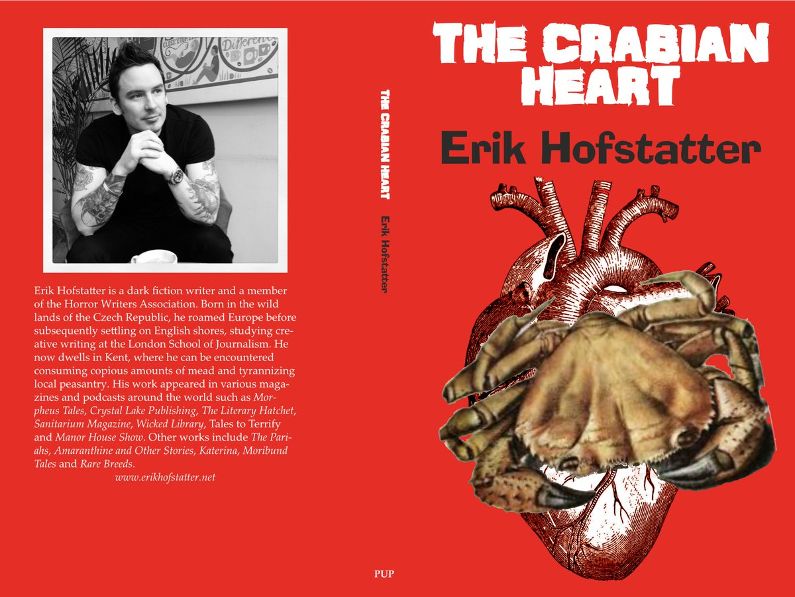 When Erik Hofstatter contacted me about reviewing his upcoming release The Crabian Heart, I said “Sure!” A few minutes later, I sat looking out my office window at the snow coming down and wondered just what the hell a Crabian Heart was. Well, have no fear good readers! I’ve got the scoop and I’m here to tell you about it!

There’s lots of coolness involved in the release of this novelette. For starters, Erik Hofstatter is a member of the HWA who has written many fine pieces for big names, so this is not a debut. In fact, this is a piece that is “really close to his heart.” The book is being put out by Parallel Universe and Karen Runge will be writing the foreword in this novelette of two great stories. Sounds good, right? Yes indeed! Definitely something for lovers of speculative fiction to put on their list to Santa.

The Crabian Heart is complex tale that seems deceptively simple at the beginning. We are plunged immediately into the lives of a boy named Ales and his mother, Irena. They are Syrian refugees being housed in a funky, derelict hotel while Dad is held in prison. The hotel is run by an old woman named Zsofia who is alternately comforting and horrifying to the young boy. She speaks to him when he is alone and screws with his head.

Then Ales meets Enola on the beach and falls for her like the proverbial ton of bricks. She becomes everything immediately. He can think of no one else and wants to be with her constantly. We’ve all been there, or will be. At the tender age of 13, this is Ales’ first time and when tossed together with the dislocation of being in a brand new country he doesn’t feel much a part of, it’s like being crushed in the claw of a giant crab.

While Irena deals with the crusty details of the real world, Ales tries to understand love. He wants to love and feel it, really feel it without holding anything back. Everyone tells him that his heart will hurt when it gets broken. He might even die from the pain. Better he have a Crabian heart that is impervious to pain. But if he goes that route, he will have to give up being human. What should he do? Have eternal love and no pain in another form forever, or live life as it comes and be hurt sometimes and delighted others?

Fountain of Drowned Memories is a horrifying tale about an old man trapped in a room with a strange fountain that makes him feel better in little bursts. The rest of the time, it sucks his brain dry of intelligent thought. He is a volatile, babbling idiot who shouts at people trying to help him. Even when his own son comes to see him, the man who can’t remember things tries to throw him out. Is poor Lorcan suffering from mental illness and afraid of what is merely a sink in his room? Maybe, but as his son takes a seat beside him and the fountain gurgles, they both shiver.

I like this little collection a lot. Definitely a case of bigger not always being better. Hofstatter could have watered this down with more words, but that would have taken the impact out of the stories. I also like how he slips a lot of important messages into his work. For example “people are scared of what they don’t know…or understand,” says Enola, as she and Ales walk along the beach. Zsofia tells him that life is a gamble and his mother points out that the powers that be make the rules that govern us and we have to go where they tell us to. Ultimately, the decisions of what we do are ours, but I’d like to suggest that you try a copy of The Crabian Heart.   That forward is going to be the icing on the cake!