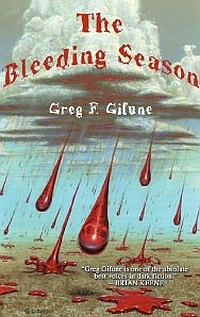 Greg F. Gifune is one of those prolific, award-winning authors that I’ve never read and, I’m ashamed to admit, I’d never heard of before giving The Bleeding Season a try.  He’s been writing for more than a decade, but initially, it seems, most of his work was published by small presses in limited editions.  There’s no more excuse not to know about this guy: his work has now (all?) been made widely available in new print and electronic editions by DarkFuse.  Though The Bleeding Season was originally published in 2003, DarkFuse brought it back in 2010, and I’m very glad they did.

This is the story of the three survivors of a group of five boyhood friends who are now adults struggling to make sense of their experiences as they realize they didn’t know one of their best friends as well as they thought they did.  Boyhood and the lives of boys are rich sources for novelists to explore, and horror novelists have been very successful at plumbing these depths: Stephen King has done this to great effect several times – “The Body” and It come to mind – as has Robert McCammon in Boy’s Life.  I’m happy to report that Gifune has also deftly continued this tradition of examining the effects of boyhood on manhood.

Five boys – Tommy, the outgoing leader; Alan, the writer; Rick, the tough guy; Donald, the sensitive kid; and Bernard, the outcast and weirdo – growing up in working-class Potter’s Cove, a small town in coastal Massachusetts, become an unlikely set of best friends.  Life never goes as anyone plans, and Tommy’s untimely death at age fifteen shakes the boys; their lives are never the same after that.  After high school, the survivors pursue separate paths, but they remain close.  Now in their late 30s and unhappy with their own life choices, Alan, Donald, and Rick have to come to terms with Bernard’s recent suicide and the revelations about their friend that surface after his death.  Bernard, as it turns out, seems to have been far more than he appeared.  He wasn’t just an awkward loser who wore a toupee and sold cars.  He had a dark side to him.  Possibly a very, very dark side indeed.  How deep that darkness went is what they have to discover.  Was Bernard really the rapist, torturer, serial killer, and Satanist that some evidence suggests?  Could they really have been this wrong about a guy they thought was a close friend for all these years?  That’s what Alan, Rick, and Donald have to find out as their own lives unravel and the mutilated bodies of women start appearing.

The story is told in first-person by Alan Chance, the would-be intellectual and writer.  Like the rest of the boys, Alan once thought he was destined for greatness.  Instead, he’s now a washed-up writer who never published any of his work, but has instead been working as a security guard for most of his adult life in the same small town he grew up in.  He thought he was marrying his one true love, but now even that relationship is damaged, perhaps beyond repair.  His boyhood friends aren’t in much better shape: Rick is an ex-con with a bad temper who works as a bouncer, despite the fact that he’s entering middle age; Donald, never having come to terms with his sexual identity, has a dead-end office job and an alcohol problem; and Bernard is, well, dead by his own hand at the start of the novel.

There are elements of the supernatural – or at least things that seem supernatural – in The Bleeding Season, but Gifune treats them with subtlety and grace, leaving the reader uncertain as to the reality of the situation.  That’s very much as it should be.  There’s nothing heavy-handed about Gifune’s approach here.  I should emphasize that this is a work of dark fiction – the protagonists are deeply flawed human beings, not to mention the troubled and seedy secondary characters they encounter – that descend into the depths of human depravity.  But it’s also not the kind of horror novel you read if you’re looking for an action-packed thriller.  It’s a slow burn, with reveals and twists that reward readers with patience.  You have to be willing to let Gifune take you on the journey as he explores these characters and their pasts at his own pace.  You won’t regret the trip, you just have to be willing to let the first half of the book unfold.  It’s a fun ride.

The negatives of The Bleeding Season are few: I don’t care for the title (blood doesn’t play an especially resonant role in the novel and Gifune doesn’t do enough with the season theme to warrant using it in the title) and probably just a little too much of the backstory is revealed in “data dumps” from the women Alan ends up querying during his investigation.  But ultimately those are small complaints.  This is a darn good book.  Really, genuinely good.  It’s the kind of book I haven’t encountered in a while, and it’s certainly strong enough that I plan to seek out more of Greg Gifune’s work on the strength of this one alone.  Highly recommended.