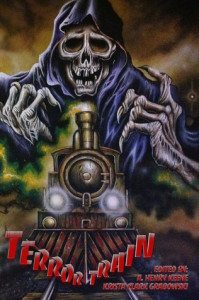 Anthologies are a notorious risk, commercially, to publishers. Inexplicably (given “official” claims of eroding attention-spans), many readers favor novels over shorter fiction, a sad reminder of a too-quickly-evolving market where “more is more,” and similar idiocy.

Well, if that’s true—or at least real, not the same thing—even the most fickle reader ought to find more to chew on in Terror Train than in many recent novel-length releases. Consisting of 42 works (17 or 18 poems scattered here and there), this train-themed anthology, as you might expect in so large a table of contents, varies widely in both skill-level and stylistic approach. There’s a classic tale from the generous and venerable William F. Nolan, “Lonely Train a Comin’,” still darkly elegant as ever. Bill Nolan was very kind to me—and the magazine—during my Horror Show years.

What I look for in anthologies published by houses new to me, is fresh and vibrant voices—particularly those possessed of (or by) singular vision and writerly confidence. Charie de La Marr’s virtuosic “Shuffling Off to Nowhere” exemplifies these traits, and ought to end up in one of the Year’s Best-type collections. Not only is the tale told in color and black-and-white, but shuttles between present-day and 1939, replete with naturalistic dialogue and an ending that shoved me hard enough to say aloud, “Goddamn—you got me.”

Mark Rigney’s masterful “Customs” unfolds like black silk, and reminded me of shorter work from Paul Bowles, or those slice-of-life Sam Shepard pieces that patiently creep into your mind and heart like snake venom. Rigney’s alienated protagonist confronts a sort of physically manifested emblem of loneliness and existential nausea, in a genuinely nightmarish yarn. If he can sustain such effects at novel-length, we’re in for a treat.

Dona Fox’s “Daddy’s Train” unspools its domestic horrors like Johnny Cash suffering amphetamine withdrawal. You see what’s going to happen, but the worst part(akin to acutal life) is its inevitability. The soul-killing despair of the reluctant survivor.

Alex S. Johnson turns in “Futurail,” where a sharp-edged cyberpunk scenario reveals just how grim such a world might be—close to the one we inhabit. Johnson’s hypervisual prose strikes with icy precision, investing both gadgets and characters with menace, and a PhilDickian reality tweak best left out of a review. If only some latte-guzzling prodigy in Mountain View could give us a weapon that destroys not people, but terrorist plots….