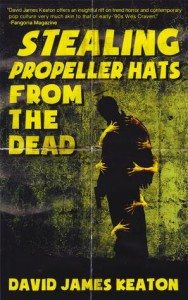 David James Keaton follows up his first two impressive novels with a collection of zombie tales from Perpetual Motion Machine Publishing. Stealing Propeller Hats From the Dead is a work that finds success on multiple levels. It is a great set of entertaining genre stories that any zombie fan dive into and enjoy one bite at a time, but it is also a deep, well thought out commentary on the history of the subgenre. The individual stories all work and, even though a few are rather forgettable, comprise a great book with with a few of the finest zombie tales of recent years. The book opens with a foreword by David Tallerman, in which he coins a phrase that well describes the stories that the reader is about plunge into as “Keatonesque pulp-literary goodness.”

We’ve all skipped introductions to books and then lied about having done so. Don’t skip “Introduction: Scare Quotes and Coffin Rides” as Keaton uses a true story of his involvement with zombies as a launching pad for the fiction to follow. Keaton describes visiting the Monroeville Mall where the original Dawn of the Dead was filmed and the backroom pseudo-museum dedicated to the film as a way of celebrating the sale of his novella, “Zee Bee & Bee (a.k.a. propeller hats for the dead).” It’s just one episode in what must have been, as the content of the book proves, a life full of zombie education.

“Greenhorns” is the first piece of fiction in the book and takes zombies in a very different direction. New recruits begin working on the famous crab fishing vessel Gone Fission from the Crab Monsters television program, a show long since cancelled. Gone Fission is the only craft to survive the finale of the show’s last season. The story is terrifically suspenseful as it tells the true history of the boat from the middle out. While the reader learns about Jake and his current and future on the ship, they learn the root of the disaster that wiped out so many ships and resulted in the show’s cancellation. Jake’s ultimate fate is directly related to the beginning of the problems for Crab Masters. “Greenhorns” is a skillfully crafted and entirely entertaining story.

The second story in the book is “… And I’ll Scratch Yours (or the one who had none),” a tale of genetic engineering and how to properly care for one’s severed arm backscratcher. The story has a few callbacks to “Greenhorns,” which actually makes “Greenhorns” a better story after the fact. There is something of a parallel to this story and the classic film Gremlins that I was fully prepared to discuss here, but Keaton goes ahead and discusses it within the story itself. There’s no need to include more of that here except to say that Gremlins fans will likely quite enjoy this one.

“Do the Munster Mash” and “The Doppelganger Radar” do not follow each other in order in the book but are certainly related. Between the two tales there are a rash of dog bites that may or may not be dog bites and a discussion of how people tend to look so much like their pets. These stories are best read in the order in which the appear, but reading them a second time back-to-back is recommended for a more complete reading experience.

For an extended riff on dead baby jokes and other repellant and honestly funny comedy, “What’s Worst?” is for you. “The Ball Pit” tells the story of how humankind faced a possible extinction event because of a rogue medication that causes priapism. It’s likely the first time a fictional boner has threatened the future of the world. “The World’s Second Shortest Zombie Story” is fascinating and leaves the reader wondering if they know what really just happened.

“Three Ways Without Water” is a story set in the same fictional world as Keaton’s novel Pig Iron. The story was written some time before the novel and presents an interesting challenge in describing how the two works are related. “Three Ways Without Water” includes elements that are scattered throughout the entire novel, which is about 175 to 200 pages longer. It could be considered a prequel, but that doesn’t quite fit that definition correctly. The best explanation of the story is that it’s an early version of a story that would evolve into something much larger and more complex. It’s a great stand-alone short story and a rare glimpse into the creative process.

The main course of the book is served up in “Zee Bee & Bee (a.k.a. propeller hats for the dead).” It is a novella of good length that serves as an homage to, and a complete deconstruction of, the zombie story. With copious references to just about every significant zombie film ever made, this is the zombie story against which all should be judged going forward. Actors have created a combination bed and breakfast dinner theater-like experience that allows couples to spend a weekend in a rural house fighting off the zombie hordes. If you can have an honestly serious conversation about the Nazi zombie film Shock Waves or argue the spelling and chronology of Lucio Fulci’s Zombi 2, or Zombie, you will swallow up this piece in one sitting. There is also a great twist that takes the story to an ending that it’s unlikely readers will see coming. “Zee Bee & Bee (a.k.a. propeller hats for the dead)” is a crown jewel to this collection of stellar fiction.

Readers new to Keaton will find Stealing Propeller Hats From the Dead a smart and fun entry point to the author’s work. Pig Iron and The Last Projector are both excellent novels, but are both very challenging reads. Challenging in the best way, as they experiment with the most basic elements of narrative storytelling, taking old ideas in very new directions. Keaton does not shy away from the bizarre, nonlinear and, most notably, the unapologetically anarchistic in his novels. He does the same, to a lesser extent, here. These stories are easier to understand than his previous books, but they do introduce the author’s unique style and do not pander to the reader.

The collection ends with the rules to a great zombie movie drinking game that you must absolutely never, ever consider playing.