Sefira and Other Betrayals – Book Review 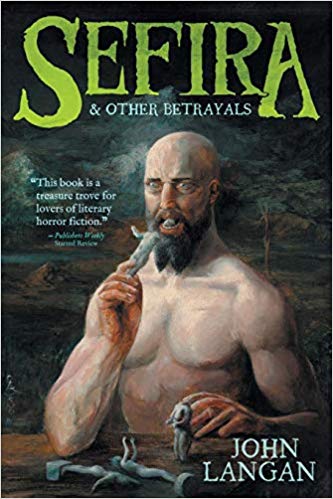 Sefira and Other Betrayals
John Langan
2019
Hippocampus Press
Reviewed by Gordon B. White

John Langan’s third collection, Sefira and Other Betrayals (Hippocampus Press), is peak John Langan. This book collects seven stories – two previously unpublished – representing some of the most wonderfully constructed, hyper-literate, and yet engaging Weird fiction available today. For those who already know Langan, this will cement his reputation as a master craftsman. For newcomers, however, the price of entry might initially appear a bit steep, but perseverance will be rewarded.

Let’s start at the beginning, with the previously unpublished novel Sefira which opens the collection. It’s a slim novel, yes, but despite being part of a collection, Sefira demands the same kind of engagement as if it arrived between only its own covers. It’s a road trip where the journey is the story, one that follows a bumblebee narrative line through the present and the past, doling out backstory in small bites even as our protagonist Lisa follows an intentionally circumlocutious course in pursuit of the titular Sefira, a homewrecker who has absconded with Lisa’s husband. As she travels forwards and reflects backwards, Lisa undergoes several unsettling physical changes in the narrative present which reflect (and occasionally precede) the emotional turmoil, which is gradually revealed.

Although the road to Lisa’s and Sefira’s confrontation spirals through alterations and altercations, once they converge, the story reaches an emotional and physical confluence that demands to be read without interruption. I won’t spoil it, but there is hand-to-hand combat, gruesome body horror, and enough white-knuckle action that putting it down is harder than fighting an undying lust-zombie. Once the winding web of emotional involvement in the preceding story is drawn tight around the spiders at the center, it takes on a massive emotional heft that a shorter narrative couldn’t have managed. Sefira itself, then, is an excellent novel, but its position as the opening story demands a warning. It sets the stage for the rest of the book, but readers unused to Langan’s interest in non-linear narrative patterns and rich character work might stumble a bit before they reach the shorter, more immediately engaging pieces.

After Sefira itself, the rest of the book opens like a cloud break. Langan’s work is impeccably written, and the next stories seem to rip along. Where the opening novel demands a particular attention as it follows a spider spinning her web before revealing the ultimate pattern, the next story, “In Paris, in the Mouth of Kronos,” cuts that web both in its title and at every possible point within the narrative itself. As is common with Langan’s work, it’s a story about stories, but that story is about cutting through other fictions. The narrative is about how carefully woven rationalizations and betrayals can be cut short as if by a flint-sharp knife, and end just as terribly as that title suggests. The wonderful prose, the fully realized characters, and the dense narrative patterns of Sefira are here, just abbreviated by the lines of fate. It’s a wonderful shift, and one that both heightens Sefira’s resonance and clears the slate for what’s to come.

The next story, the aptly titled “The Third Always Beside You,” is almost a reset and a respite. Where Sefira was a personal drama between a wronged wife and failing husband writ large against universes and realms beyond time and men’s ken, “The Third” grounds it in the miniscule. Here, Langan’s strength as a chronicler of small human elements and emotional insight comes to the fore as a daughter begins to understand the ghostly presence that lingers, and may have always lingered, in her parents’ home. Although bookended by the speculative, the real showcase here is the intimate story of betrayal at the center and the relationship that emerges from that pit. That the revelation is delivered as a story within a story is what makes a well-realized character study into a “John Langan story.”

If I may take a moment to insert myself into the review, I want to make special note on the architecture of Langan’s stories. As may be evident from the above, when this reader considers John Langan, it is as a master of nested narrative construction. In all of his stories, one looks for the point when the story the narrator is telling dovetails with the story that Langan is actually telling; it’s the point at which the story folds into the “story within the story,” then blooms back out as Langan balances that magic between the narrative past and the narrative present that somehow moves the entire narrative to new levels. In the very best of his work, these meta-narratives are not digressions, but serve as gravitational catapults that send the main text off into brand-new orbits.

However, I want to note that there is a risk that focusing on these technical skills obscures what Langan is actually doing so well in each story. His prose is immaculate but for the most part unobtrusive; as a result, in a field where we reviewers tend to focus on sentence-level beauty, it sometimes slips by that Langan’s primary units of construction are longer – the paragraph, the scene, the story in the story. Yet when we pull back far enough to admire the labyrinth from above, it distances us from the actual heart of his work, which is the human element. These portraits of doubt, fading relationships, and – yes – betrayals are sympathetic, empathetic, and stand alongside any more conventional “character-driven” piece. While it’s easiest to review Langan’s work from an aesthetic remove, doing so can make it sound more coolly cerebral than it actually is during the moment of reading. These stories are engrossing, moving, sometimes passionate, even visceral, but because they work so well as a whole, it’s difficult to step back to point out why they work, and so we risk missing the trees for the forest.

Instead of thinking of Langan’s stories within stories as puzzle boxes, I propose you consider them houses built for haunting. As impressive as their construction may be, it’s the animating spirits inside that make them more than just pretty, empty edifices.

With that aside complete, we return to our review already in progress:

The fourth story, “The Unbearable Proximity of Mr. Dunn’s Balloons,” uses an epistolary framing device to present an early 20th century excursion to an unorthodox sanitarium along the Hudson River. As with all the collected stories, betrayal is at the center of the narrative here, but the center is not immediately apparent and the bit of swashbuckling swordplay is a welcome treat. After this arrives “Bloom,” a decidedly surreal story that begins with the discovery of a strange cooler along the roadside, but soon becomes layered with many petals of dreams, madness, and deception as it builds towards the flowering of its final, yet inevitable form. The shapes of loss here are both familiar (tension between spouses) and new (loss of a loved one to cognitive decline), adding new dimensions to the overall thrust of the collection. It ends in betrayal, of course, but maybe not quite the same one that the characters – or even readers – were expecting.

Despite being narratively linear, Langan hits what this reviewer finds to be the capstone in the penultimate story “Bor Urus.” Here is where Langan’s remarkable ability to capture the day-to-day inner lives of his characters melds perfectly with his ability to hint at a world that lingers just beyond this one. This story steadfastly refuses to hold the reader’s hand as it lays down multiple layers of symbolic resonance in that brief, tempting overlay between realities. It does an amazing job of convincing the reader of a world beyond this one, which, even when experienced fully, refuses to be completely understood. To this reviewer, that is the sine qua non of the Weird – the existence of a pattern which, even when grasped to the full extent of our ability, is ultimately inscrutable. That is “Bor Urus”: a wonderful grappling with meaning – and its ultimate ungrapplability – through adolescence, maturity, and parenthood. It is a lodestone for those readers on the cusp of any event they hope may finally reveal to them an ultimate answer, but also a consolation for those for whom it does not.

Finally, the collection ends with another previously unpublished tale: “At Home in the House of the Devil.” Interestingly, especially in light of the comparatively lurid title and the opening line (“Every man meets the Devil once before he dies.”), this story finishes out the collection with more of a somber consideration on the nature of guilt and punishment. Despite a more or less direct encounter with a manifestation of evil, the narrator builds his own prison of guilt from the more mundane events of his life. In the end, the house of the Devil isn’t one that the Devil has built for mankind, but one that they build for him. It closes out the collection with an exhalation.

It isn’t wrong to say that Sefira and Other Betrayals is quintessential John Langan. For readers familiar with Langan’s work, this is further evidence of his place in Weird fiction’s upper echelon. For those who are new to his work, while we offer the warning that the first “story” is actually a novel and may serve as a speedbump, each piece here is impeccable in its ability to masterfully tell character-centered stories which unfold and build upon themselves. One of the finest craftsmen working in the field today, John Langan delivers another marvelous assemblage.