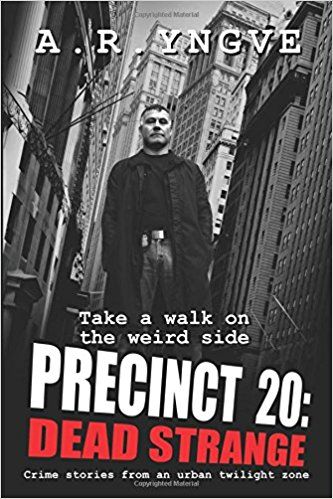 Do you like the writing of Richard Matheson, H.P. Lovecraft, A. Conan Doyle, and Rod Serling? If so, then waste no time in grabbing yourself a copy of Precinct 20: Dead Strange! It is as if these authors have travelled in time and whispered a few tips into A.R. Yngve’s ear as he wrote this monster. Wow! We’re talking about 300 pages of cool that feels like a blast from the past. But the author, A.R Yngve, is as current as you and me. Except…He treasures the masters of an era gone by and has established a connection of sorts. I know this is funny, telling you to the read the afterword even before we’ve begun, but trust me on this one. There is something special here. Writing like this would be a challenge even if the author were native to the United States, but Yngve is a resident of Sweden. That’s a little bit past the last stop on the city bus line! And yet, it all works perfectly. Talk about magic!

Lately people have been discussing KOLCHAK The Night Stalker, a show from back when television was good, and expressing disappointment at the short run it had. It was about a unique news reporter who explores unexplained phenomena. Sadly, it didn’t last. BUT…If you’re willing to take similar stories in written form, allow me to introduce Lieutenant Detective Innis Garris from the 20th Precinct of a large, unnamed American city. Most likely yours. Strange things happen in this old section of the city and only a person like Garris is right for the job. He’s a big, quiet, man who looks closely and listens to every detail. When another officer might deny the existence of dark forces, strange beings, and ancient curses-Garris knows that only a fool would do so. He survives and solves cases, but when it’s press conference time, he stays quiet.

Nobody watching the six-o-clock news is going to believe that practitioners of black magic traverse tunnels beneath the streets. When a construction laborer comes home from a hard day at work, she doesn’t want to hear that packs of dangerous cats rule the streets in the wee hours of the morning. No, these people want hard facts and evidence to explain a sudden disappearance or death. Garris can’t give them that, so he’d rather the Chief of Police gave a fabricated announcement, than to attempt to convert nonbelievers.

See, unlike many detectives, private-eyes, and cops that populate so many books, Garris is not a media hound or a seeker of the spotlight. He doesn’t try to dazzle anyone with all of his previous achievements, nor is he one for going on benders and getting himself shanghaied. Nope, what Garris wants is a cup of coffee and a couple Filet-O-Fish sandwiches from McDonald’s. He also wants to keep the people in the neighborhood he lives in as safe as possible. He has a good helper by the name of Sergeant Bolland who works with him often. They mesh well because they are the Yin and the Yang of partners. But one thing they hold above all others is respect for each other. That is a priceless thing that can only be demonstrated by an officer that sticks by their partner no matter what. Bolland is a quiet and pleasant man who enjoys a donut or three with his coffee, but he is a bulldog out in the streets.

Another thing that really adds atmosphere and credibility to Precinct 20: Dead Strange are all the cool vintage photographs of American cities that Yngve used to give a visual palette for readers. Interestingly enough, he was able to source these photos from the Library of Congress’ public domain site. They are not the same city, but they could be. It is obvious that the author took a lot of time to make his book just right before publication. I am very impressed by all the attention to detail in this magnificent volume and I think you will be as well. It is a veritable feast of a book, which will not be finished in one sitting, nor will you want to. There is a certain delight one gets when knowing that their plans for the evening include another episode of Garris and Bolland bending our minds while they keep us safe from the dangers that exist in the shadows of Precinct 20: Dead Strange.

Not sure that I really need to tell you this if you’ve been reading my review of this wonderful book by A.R. Yngve, but here’s the scoop. Precinct 20: Dead Strange gets a 5 out of 5 star rating from me. Maybe it sounds silly, but I love this book! Perhaps that is because I live in the Binghamton, NY area, home of Rod Serling. But the reality is that I can feel all the hard work and love that Yngve put into this book to make it shine with a strange, unearthly light. An alley is no longer boring when it is the entrance to a magical otherworld. Maybe that shabby old building you pass by on the way to work is a portal into another dimension. Could you ever believe that behind the locked fire door of an abandoned factory exists the coolest club ever?

Those possibilities exist and because they do, it is essential that Lieutenant Detective Innis Garris exists as well to protect us from our own foolishness and the things we know nothing about. Although he can work alone, the best case scenario is to have Sergeant Bolland driving the squad car and keeping a close eye on Garris. This would also be a good time to add a quote from A.R. Yngve: “There is a constant, subtle force that stands against evil. That force is love – shown in the everyday acts of kindness and friendship that people do to care for each other. Good is never completely extinguished, even here.” I’ve shortened this a little, but I hope you’ll get the point. We all can do good, be magic, if we put our hearts into it. I can’t really think of a better message to come from a book in quite some time.

If you’d like to get your hands on a copy of Precinct 20: Dead Strange, it’s available on Amazon.com in both physical and Kindle formats. I sincerely recommend it for anyone who loves vintage speculative fiction and is looking for a believable modern-day hero dealing with unexplainable things. Oh, and one last thing: On behalf of Detective Garris, Sergeant Bolland, and A.R. Yngve, “Welcome to the 20th.”