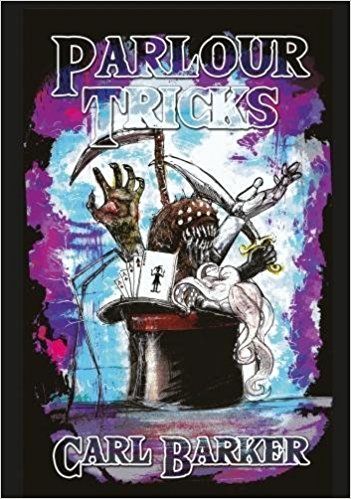 Wow! Talk about an interesting short story collection! Carl Barker’s Parlour Tricks is what you are looking for if you enjoy twisted speculative fiction with shocking endings. Not only does this book boast a highly divergent content level, it also ties the stories together by relating them to specific magic tricks in a section called The Inner Circle at the end of the book. At first, I was a little skeptical of that, but it works! The cover art by Luke Spooner draws you into Barker’s clutches and after that it’s time for the magic to begin. Kids, don’t try these at home!

Eater of Lost Causes is a cool tale about Leonard, a young dude who discovers an amazing ability to experience people’s lives by eating their ordinary household trash. Things like teabags, egg cartons, and cardboard yield up the lives of their previous owners to his wondering mind. Leonard likes the way his “trips” take him away from the disaster zone of his parents’ crumbling marriage and all the abuse his mother heaps upon him in her angry times. After an especially bad time, the boy hits the road and ends up in the giant landfill where all the city’s garbage is dumped off. The possibilities provided are unlimited and Leonard makes a very special friend, who helps him to understand his powers. But good things can’t last forever and an attack from a Cthulu-type monster destroys Leonard’s new life. What will he do to survive?

Unlike Leonard, who is forced out of place multiple times, Bryan finds himself forced into place by the leader of his rock band. In With The Band Jukebox Willy wants Bryan to return to his position of guitar virtuoso in their former band and he’s not going to take no for an answer. Trouble is that the rest of the band died in a plane crash 18 years ago. So they can’t all just meet up in a pub and start grooving. No, the place that Bryan will have to go in order to join the others is a dank dark hell pit. He tries to ignore Willy, but Bryan finds that the ghoulish drummer is everywhere and his rampages are becoming more dangerous. Soon decomposing creatures are crossing into the world of the living and wreaking havoc. Bryan’s only chance for survival is in playing at least one concert. Will he make it out alive?

The Man Who Came To Dinner is a powerful piece undiminished by its brevity. Since I have used a similar approach to death in one of my stories, I totally get it. We all fear death, especially as young, single folk. There is so much we want to do yet-NEED to do! But, when a person is at the other end of the spectrum, death can bring mercy and relief from pain or loneliness. May we all be fortunate enough to have such a polite Ferryman taking us to the next world.

Since my aim is to whet your appetite and not spoil your meal, that’s it for the previews. Now it’s time for me to answer the big question. Would I purchase a copy of Parlour Tricks for myself or a friend? Indeed I would! Every book I’ve read from Parallel Universe Publications is better than the previous one. I’m not just saying that to be nice, either. There is definitely a positive evolution taking place as they grow their catalog of available works. As a reviewer, that is something enjoyable to watch. I totally encourage you to purchase a copy of Carl Barker’s Parlour Tricks in your favorite format today! Please keep in mind that this book is intended for adults and contains material best suited for them. As always, thanks for reading and remember: If you find yourself chained to a breakfast bar with no clothes on, it’s probably the work of a nutty ex-girlfriend. Good Luck!