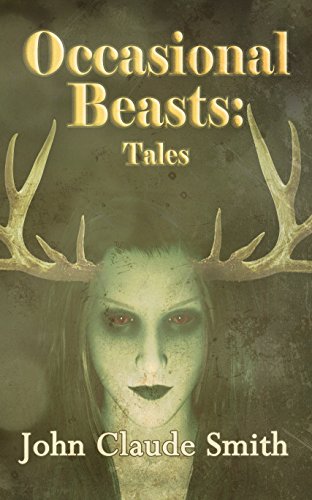 John Claude Smith’s new collection Occasional Beasts: Tales fearlessly explores themes of transformation and transcendence through a menagerie of monsters that are supernatural, human, or often something in-between. Like peering into a darkened aquarium or down a misty alleyway, dark things lurk behind the grit and ragged edges of Smith’s physical and psychic environments. When those beasts pounce, however, Smith’s creation of indelibly horrific images is second to none and the result is satisfying horror with hidden depths.

Occasional Beasts collects fourteen stories: five original and nine which have appeared in prior anthologies and chapbooks. Although these stories are unmistakably “horror,” their flavors run the gamut from body horror to supernatural horror to the Weird and even a hint of sci-fi and humor. Predominantly set in a contemporary “real” world (although how real the world is usually depends on how hard it is scrutinized), these stories take place in a variety of setting and follow a variety of characters. As Smith exercises these different perspectives, however, the stories in this collection retain certain unities of style and theme.

Each story here feels lived-in, the prose bustling with observations and asides that add edges to the characters and flesh out the worlds. Often, although not always, the characters are down on their luck or already on the margins, adding a layer of dust and grime to the proceedings. However, it is Smith’s skill with creating singularly horrific and unshakeable images at the climax of his stories which is so striking that, taking these stories all together, the reader begins to feel like an adventurer. There is an underlying structure here that can be picked up like the trail in any good hunting expedition: readers begin to expect that some visceral shock is hiding at each story’s end, and it is the equal measures of dread and anticipation for that reveal which drives them to follow the tracks into the darkness. Fortunately, Smith never falters here, and when the beast (literal or figurative) comes into the clearings, it is always duly satisfying.

Furthermore, most of the stories here seem to share a hidden DNA in the moral and aesthetic universe that they occupy. This is a cosmos that runs in accordance with the sensibility of a bluesman by way of a gumshoe—often the men are louts, the women have been done wrong, and the devil is always just around the corner. There are a few notable exceptions (such as the deceptive banality of “Dandelions” or the bourgeois esoterics of “Vox Terrae”), but the shared sensibilities makes many of the stories feel of a piece with one another.

Thematically, the guiding principle of this collection is suggested by its title: Occasional Beasts. Many of the stories here coalesce around the theme of “transformation,” usually in a horrific fashion. While shape shifting is a familiar theme in fiction and Smith offers his takes on the common tropes (as punishment, via seduction, etc.), one of the more interesting tactics he employs is exploring how the concept of “changing” differs from “being changed” — a shift in the actor and the agency greatly changes the meaning. Several of these stories take a hard look at what it means to be forced into change, and what result that has on the relationship between the actor and the one acted upon. For example, “A Declaration of Intent,” “The Wounded Table,” “Beautiful,” and the almost-titular “The Occasional Beast that is Her Soul,” all examine different facets of elective versus forced transformations and their impact. Working together, then, these stories coalesce to offer an intriguing examination of this rich theme’s many aspects.

Of course, transformation and transcendence are often two sides of the same coin. Fittingly, Smith also explores this via dramatizing the shift in understanding through a shift in form. In some stories, such as “The Land Lord,” transcendence is a seductive offer to forgo the pain of individuality in exchange for endless, mindless collective pleasure, but more often the transcendence is harder won. In stories like “The Glove” or “I Am,” hardship and turmoil leads to the revelation of previously unknown depths, but perhaps the most striking evocation of this is in the aptly titled “Chrysalis.” In that story, a put upon wife begins receiving lines of poetry from the universe, presaging a great and terrible—and yet perhaps invisible—shift that may allow her to escape her bonds. Through these different examinations, the tales in Occasional Beasts add a contemplative depth to the pure horror thrills.