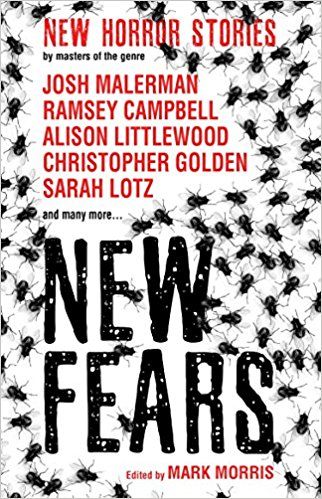 I really like short story collections because of the variety involved. Even if all the stories are by the same author, there will be different settings and characters to stimulate your brain and keep the reading experience feeling fresh. Plus, in today’s fast-moving world, it can be hard to finish a novel fast enough to keep the story straight in your head. But most people can zip through twenty pages a night and feel satisfied. Another great thing about collections is that they make great gifts for the speculative fiction fan on your list. New Fears is especially good because it contains 19 NEW stories, so the recipient won’t have read these stories elsewhere. Most importantly, this book kicks butt in a serious way. Let’s dig in!

My absolutely favorite story in New Fears is The Abduction Door by Christopher Golden. Unless you have a phobia, you’ve probably ridden in numerous elevators by this point in your life. You’ve probably also noticed that most of them have what appears to be a funky little door on one side. Sure, it could be for maintenance-if the hotel has some munchkins on staff. Otherwise, what’s the deal with that thing? The narrator of Christopher Golden’s chilling tale give us the scoop and it’s enough to make you want to take the stairs for the rest of your life! The sole purpose of that door is the abduction of children when no one is looking. Just, zip! Gone! You can try and get your child back. But if you do, then you’ll be stuck in the strange place behind the abduction door until you steal enough children to be set free. Best plan? Hold onto your children with both hands and keep them away from The Abduction Door!

Speaking of being stuck in funky places, Brian Keene’s story Sheltered In Place puts us into an airport that’s the scene of a mass shooting. Police are shouting at everyone to get down and waving their guns at those who don’t comply. Even after everybody is down, the police are near panic. Possibly too near, but they can’t find the perp on what appears to be the work of a highly organized criminal. Civilians nearly end up getting shot for trying to answer their cellphones and others are bleeding to death because help isn’t there yet. Police are stumped! Where is the bad guy? Turns out he’s lying on the floor with everyone else and just walks on out the door after stashing his gun under a dead body. If that doesn’t scare you, I don’t know what will.

There are also tales of the uncanny in New Fears such as Eumenides (The Benevolent Ladies) by Adam L.G. Nevill. Regular guy Jason is smitten with one of his female co-workers, an interesting girl in an otherwise blah kind of town. He knows that his chances are about as good as that of a goldfish fighting off a hungry cat. But hell, he’s got to try! So he sucks up his courage and asks Electra out. Amazingly enough, she says yes! After the angels stop singing and Jason can focus enough to speak, he asks her where she’d like to go. That’s when things take a decidedly weird turn. Electra wants to go an old ruin of a zoo that’s been closed after some nasty business involving three women who killed all the animals. Even though Jason is quickly creeped out by the shadowy zoo that seems to be inhabited, Electra offers him the good stuff if he’ll go along with her. He almost takes her up on that offer until an enormous crazed creature attempts to join them along with two of the whack job poisoners that are supposed to be dead. Too late he realizes that Electra is the third poisoner who was a beauty queen before joining the other side. He makes a run for it, but you know things are not going to end well…

On the lighter side, is there ever a time when death can be darkly hilarious? Yes there is, and Sarah Lotz shows it to us in The Embarrassment of Dead Grandmothers.  Steven has been saddled with the care of his not-very-convenient gran and this night at the theater has been about as fun as a public prostate exam. Gran leaves her dentures in the ladies room, makes a racket, and offers strangers chocolates out of the box she snuck into the theater. Steven doesn’t think things could get any worse, but they do when Gran dies before the intermission. What the hell is he supposed to do about THAT? Just as he is cursing his luck and wondering if he should ring the coroner, the lovely girl from the office pops by to say hello. Steven knows that saying his gran is dead isn’t going to wow the ladies. Instead he does his best to casually leave her at the theater and dashes out for drinks with Liz. Dating is hard enough without adding those kinds of extra challenges!

Those are just four of the nineteen excellent stories that await you in this collection and I hope you are getting my enthusiasm about them. If not, let me say this: I absolutely encourage you to buy this book RIGHT NOW! All kidding aside, New Fears is a great book. I really dig all the flies on the cover and you will dig all the hours of great reading inside!