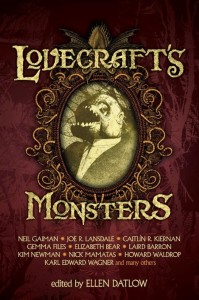 Back in 2009, Ellen Datlow edited her first Lovecraft-themed anthology Lovecraft Unbound, a collection of stories inspired by Lovecraft’s bleak universe of cosmic insignificance and overwhelming dread. Datlow deliberately avoided the Lovecraftian critters. The results were nothing short of spectacular, but not surprising considering it was Datlow compiling the anthology. If you don’t know Datlow’s work, look her up on Amazon. If you haven’t read at least half dozen anthologies compiled by her, you have no business calling yourself a horror aficionado.

For Lovecraft’s Monsters, Datlow takes the opposite approach, collecting stories reinterpreting Lovecraft’s bestiarum vocabulum. In her introductory notes, Datlow discusses the selection criteria: avoid the pastiches, skip the constantly reprinted old chestnuts, and include stories by authors not usually associated with the mythos. The combination works spectacularly with such luminaries as Neil Gaiman, Elizabeth Bear, Caitlín R. Kiernan, Thomas Ligotti, Karl Edward Wagner, and Joe R. Lansdale. Although in all fairness, several authors have worked in the Lovecraft universe more than the criteria might suggest.

Although Neil Gaiman’s “Only the End of the World Again” has been among my personal favorite Gaiman tales, it was a good omen to see his story open the anthology. Gaiman’s uncanny knack at writing narration that appears mundane but seethes with underlying malice is perfect for a visit to Innsmouth

Caitlín R. Kieran’s “Love is Forbidden, We Croak & Howl” again proves she has never produced a bad story. In the shortest story in the book, she returns to her Providence ghouls and her calculations as to the real-life location of the fictional Innsmouth. In six pages, she weaves a story that begs for expansion or a follow-up.

Newcomer Nadia Bulkin’s “Red Goat Black Goat” may be the most unsettling of the tales in the Old Gent’s world. Set in Indonesia, Ina Krisniati is the newly hired babysitter with a wealthy family. She is responsible for two children, but it begins to appear to Ina that the children already have a guardian: a supernatural presence that doesn’t like interloping nannies. Bulkin raises the bar for relentlessly unhappy endings. Lovecraft would be delighted.

Where else, in one anthology, can a reader jump from roman noir werewolves to steampunk tanks in the Amazon to tales of forbidden love on the Innsmouth shore to Pinkerton agents in the Wild West? It’s that wide of a variety in 16 stories and two poems and Datlow’s impeccable selection skills only fail with the inclusion of a story by Nick Mamatas, which, in addition to being the wearisome trope of a conversation among survivors at the end of the world, was in the previous Datlow-edited Lovecraft anthology.

Writing fiction set in the world of H. P. Lovecraft is a slippery slope. One misstep and you’re writing hackneyed pastiche that even August Derleth couldn’t stomach. It takes a steady hand, a sharp eye and an encyclopedic knowledge of short story writers to sort the wheat from the chaff. Fortunately, we have Ellen Datlow to lead the way.