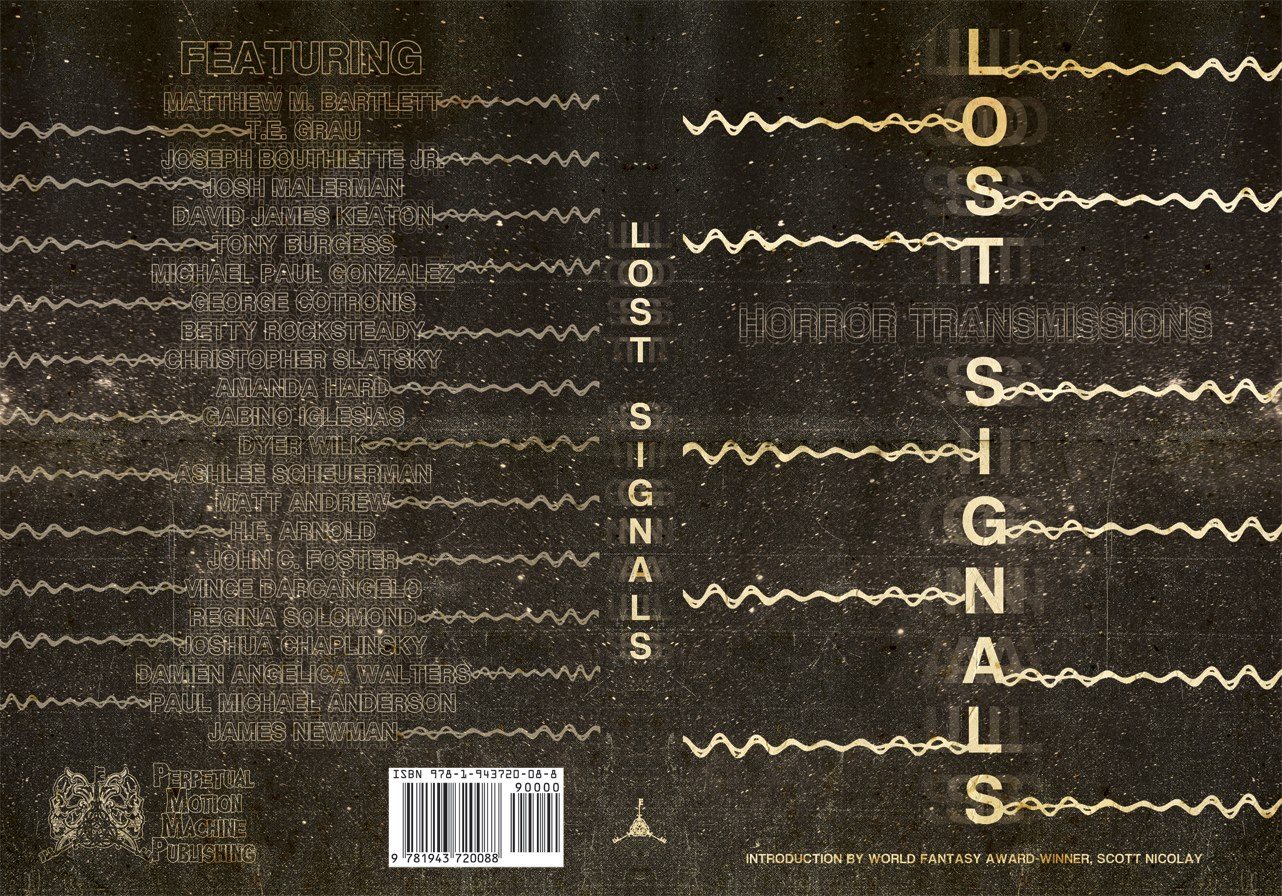 Lost Signals is a themed anthology from Perpetual Motion Publishing about “Radio waves, numbers stations, rogue transmissions, and other unimaginable sounds you only wish were fiction.” It features impressive cover art by Matthew Revert, an introduction by World Fantasy-award-winning author Scott Nicolay, and contributions from the likes of Tony Burgess, Michael Paul Gonzalez, Betty Rocksteady, Christopher Slatsky, John C. Foster, Damien Angelica Walters, Paul Michael Anderson, and many more, so there’s no shortage of big-hitters. Within its 407 pages you’ll find a total of twenty-three stories by twenty-two writers (Matthew M. Bartlett, inexplicably, has two entries) and the vast majority reek of quality.

Themed anthologies are, by their nature, an awkward beast to master. Generally speaking, too many stories are shoe-horned into spaces they don’t belong by writers and editors determined to make them fit. That isn’t the case with Lost Signals, with virtually every story benefiting from a sense of belonging. It gets off to a solid start with efforts by Bartlett and Shirley Jackson Award nominee T.E. Grau, setting a dark, creepy, often other-worldly tone for the rest of the volume, which toes the line between sci-fi, bizarro fiction, and horror, without actually ever straying too far into one genre.

For me, the bar is raised to new heights with “The Givens Sensor Board” by Josh Malerman, a writer who made a considerable splash with his Bram Stoker Award-nominated novel Bird Box. His contribution here is a breathless account of a graveyard worker faced with a terrible conundrum. The pace doesn’t let up with the next story, another personal favourite of mine, a surrealist tale of loss, despair, and a strange pet by David James Keaton called “Sharks with Thumbs.” And no, the strange pet in question isn’t a shark. That would be way too obvious. “Rosabelle, Believe” by Amanda Hard is a gut-wrenching tale of tragedy and faith, written with insight and tenderness with the smallest edge of malice, while “The Last Scream” by Gabino Iglesias is something teachers of all levels will be able to relate to when what starts as a simple class project builds to a horrific climax.

“Children of a German Autumn” by Matt Andrew is the poignant tale of a prostitute in 1970s Berlin who comes up against much more than an oppressive regime in the search for her son, and “Night Wire” by HF Arnold, first published in Weird Tales in the 1920s, contains some of horror’s best-loved elements (spooky graveyards and a strange mist concealing unspeakable monstrosities) and weaves them into something uniquely chilling. Also worth a mention is “The Small Hours” by Vince Darcangelo, a tale of OCD-tainted, technology-enabled voyeurism which could double as one of the most disturbing Christmas stories ever.

Elsewhere in this sprawling collection, we have tales about time travel, a Kabul war zone, radio signals driving people insane, top-secret transmissions, government shadiness, and weird shit happening in various guises in all kinds of remote locations. Lots of weird shit, some with echoes of classic Twilight Zone or Outer Limits episodes, and some with a distinctly fresh and modern flavour. Whilst a few of these tales will almost certainly leave you scratching your head, most are memorable and deeply unsettling, in all the right ways. My advice would be to not try and second-guess everything, just enjoy the ride. You don’t need to understand how chocolate is made in order to enjoy the taste. Christine Morgan, writing for the Horror Fiction Review, summed it up nicely when she said, “This book will probably make you paranoid, if you weren’t already.” And she’s probably right.