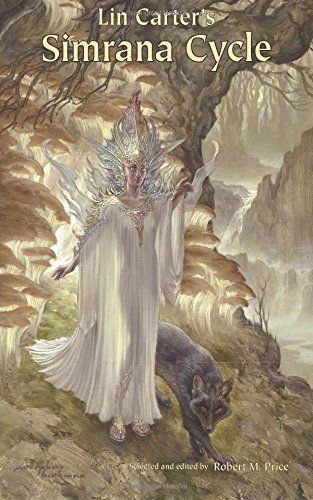 Weird fiction, that’s a hard one to define. Is it horror? Sci-fi? Fantasy? Well it’s a little bit of all three. Okay, but is it the domain of H.P. Lovecraft? No, not even close. While he is arguably the most famous of its practitioners, he was not alone in following that weird, winding path, and there are many great authors who still follow it today. What does all this have to do with the book I’m talking about today? Well, author Lin Carter wrote a bunch of tales set in the wonderful world of the Dreamlands. Influenced far more by Lord Dunsany than H.P. Lovecraft (who was also a major influence on many of Lovecraft’s early work), these stories lean more into the fantasy side of the weird. That said, there are plenty of other elements in these tales so that the work of Carter is not so easily classified. And they have such staying power they are never easily dismissed, although many readers today have never heard of the many or his work know as his Simrana Cycle. Three cheers, then, to small independent publisher, Celaeno Press, and Editor Robert M. Price for attempting to change that with this new collection of Carter’s stories, backed by an anthology of other great authors who were inspired by the man and chose to pen their own Simrana-like tales.

Unlike many modern fantasy novels today, here you won’t find a riff on J.R.R. Tolkien. No, they are far more fanciful than that. Editor Price starts things off appropriately with 12 of Carter’s stories. None are overly long, all are quick and fun reads that go down smooth. If that was all there was to this book it would be very small indeed. This is where the others come in. First and foremost there is Lord Dunsany who is a giant in the fantasy field, yet sadly someone mostly forgotten today. Robert Price, a great author in his own right, contributes three tales and a coloration with Carter. I assume it was posthumously but I’m not 100% sure. Then there is another collaboration between Carter and Glynn Owen Barrass. Charles Garofalo and Adrian Cole both contribute two fine stories here. Then Darrell Schweitzer, Gary Myers, and Henry Kuttner each do a Simrana story as well. Altogether you get 31 stories, but do they still warrant a read today? In a word: yes.

Lin Carter’s tales herein are not just pastiches of Lord Dunsany’s work. That’s like saying the best of the current weird fiction writers working today are just doing pastiches of Lovecraft’s Cthulhu Mythos. Inspiration is not the same as imitation and what Carter did was take the world that Lord Dunsany made and built upon it. In turn, the other authors in this volume take what Carter did and build upon that. Sure the foundation is the same, but each voice is unique with their own tails to tell. Simply put, if you are a fan of fantasy that dabbles in the weird, you owe it to yourself to acquaint yourself with Mr. Carter and his stories. Now, thanks to this book, that is easier than ever.