I Can Taste the Blood – Book Review 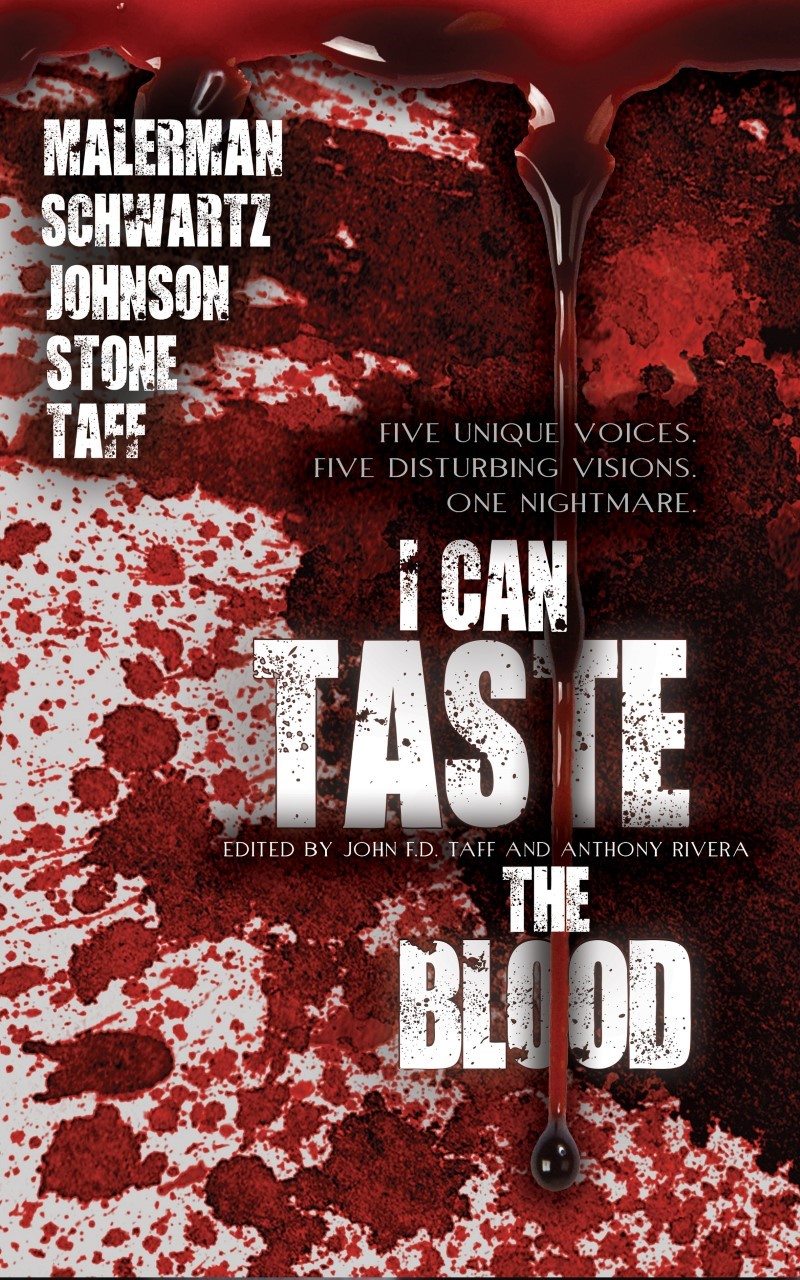 I have the utmost respect for Grey Matter Press. They work with some of the biggest and best names in the business, from writers and editors all the way through to designers and cover artists — everything they do oozes quality. That’s one reason why I was so keen to get my hands on this book. That, and the fact that it contains some of my favourite writers. I was also intrigued by the concept; originality is something often sadly lacking in these kinds of anthologies and, it has to be said, in horror fiction in general. To cut a long story short, author John F. D. Taff went out for pizza one night, and decided to use the establishment’s washroom. There, he saw the words I CAN TASTE THE BLOOD scrawled on the wall. The statement (or was it an admission?) stirred something in him, and he took a picture on his phone. Fast forward several years, and what we end up with is five different novellas by five different writers, all sharing the same title. Essentially, this book is five unique voices, all riffing off the same idea.

Opening the collection is current darling of the scene, Josh Malerman. That title is no slight, by the way — it is entirely deserved. He first found success as frontman of the rock band the High Strung, but writing was always his calling. Apparently, he wrote forty unpublished novels before 2015’s Bird Box earned him a Stoker nomination, widespread acclaim, and a (rumoured) movie deal. His effort here is a bleak tale of trickery amongst desert travellers. It seems to be set in the Biblical era, though the time frame, and other details like the location and age of the protagonists, is deliberately left to the reader’s discretion. It is written in such a way as these things don’t seem important, or even relevant. The fundamental questions are the same, chief among them being if you had a young family to protect and someone knocked on your door in the middle of the night asking for help, would you answer it? This one will live long in the memory.

Next to throw his hat in the ring is twenty-something New Yorker Daniel J. Stone with a story of obsession, addiction, sadomasochism and destructive love. His borderline-poetic prose is often a joy to read but be warned, the graphic depictions of gay sex might add another element of discomfort, apart from all the death and mutilation going on. It’s enough to make a straight man squirm. Heck, it’s probably enough to make a gay man squirm, too. You keep thinking “surely, he isn’t going to go there”. Oh, but he does. He does go there, and he takes you along for the bloody ride. In the afterword, which is supplied by every author, Stone describes how painful, even torturous, the writing process is for him, something which certainly comes through on the page. Equal parts unsettling and fascinating.

At first glance, the contribution from Joe Schwartz doesn’t really belong in what is essentially a horror collection. His gritty depiction of the seedy underbelly of modern America would perhaps be more at home in a noir crime anthology. But to classify it that way would be doing the author, and his story, a great disservice. There are no ghosts or demons, no witches or werewolves. There aren’t even any zombies. Whaat? But this story doesn’t need them. Instead, it focuses on the dark side of human nature and rams home the fact that people are capable of far worse horrors than any fictional entity. When all is said and done, this story is one of my favourites in the entire collection.

On we go, and next up is a story by Erik T. Johnson. With the release of his debut collection of fiction imminent, Johnson is a comparative newbie yet displays the range of skills you would expect to find in writers far more experienced and accomplished. He has an impressive turn of phrase, and creates a multi-layered tale full of metaphors and symbolism centered on the weird relationship between a mother and her son. Unfortunately, he lays it on a little thick for my liking and the result is dense, difficult to follow, and never really grips the reader. Not this one, anyway. It’s almost as if he’s trying too hard, and in my opinion he could benefit a lot from being more direct and honing in more on the crux of what he is trying to say rather than skirting around the edges. Johnson definitely has talent, and his potential could lead him to being a future trailblazer.

The last word goes to Taff himself, one of the leading names in horror and author of over eighty published short stories as well as four novels. His reputation is such that he has earned the moniker ‘King of Pain,’ and it is entirely justified. If the other contributions to this collection sometimes stray toward the trippy and fantastic, Taff walks up to that line and pisses all over it. Conversely, however, his story also harks back to classic pulp horror in that it is essentially a creature feature which gradually builds to an earth-shattering climax. Like all good stories, there is a message buried deep within the lines.

All in all, I Can Taste the Blood is a remarkable offering from one of the finest publishers of dark fiction on the planet. It can either be utilised as an introduction to some of the best new (and old) talent out there or taken it as a whole, in which case you get a load of high weirdness thrown at you with zero fucks given. Which is just how horror should be.