He Digs a Hole – Book Review 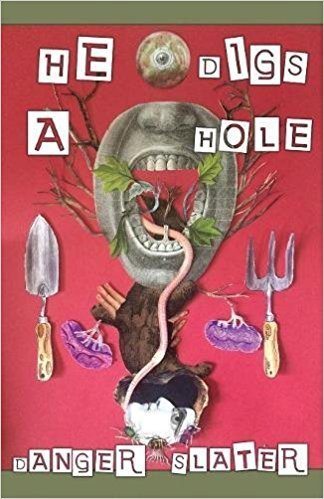 Danger Slater’s newest novel, He Digs a Hole, starts off as a story about an average man with an average life who replaces his severed hands with gardening implements. What it quickly becomes is a gross, funny, horrific one-of-a-kind story about finding a way out of the malaise of “average,” however hard that journey may be.

The novel starts when Harrison, a normal suburban husband, eats a seed from the fleshy spleenfruit tree growing in his backyard and is then compelled to grind off his hands and replace them with gardening tools. Hounded by voices and against his wife Tabitha’s protests, Harrison begins to dig the titular hole – a task so all-consuming and a hole that grows so large that it threatens the not just stability of Harrison’s world, but the world at large. Not only do Harrison and Tabitha struggle with finding themselves in a life they never quite expected or even necessarily wanted, but a fourth-wall breaking narrator comments on the proceedings while interjecting its own existential anxieties. Then, in a cataclysmic turn of events, things get strange(r). If you’re already saying “Hold on, you had me (or lost me) at the spleenfruit tree,” well, that’s okay.

Danger Slater has a gift for approaching universal conditions – here it’s feelings such as ennui, disappointment, and mid-life crisis – through a kaleidoscope of psychedelic yet complimentary lenses. The result is that He Digs a Hole freely moves across genre lines and remixes tropes, resisting easy categorization but cohering into a satisfying and cathartic whole. While the rubbery reality on display is characteristic of Bizarro fiction, there is body horror, existential dread, and just plain Weirdness galore. Moreover, the fourth-wall breaks help to clarify that this is a story about stories — how we tell them, how we live them, and, ultimately, how we end them. Lest that sound too heavy, though, He Digs a Hole is never ponderous, but is instead carried quickly along by the lively narration and the constant escalation of outrageous events.

And what an escalation it is! Giving spoilers would be unfair, but divided into three sections – Above, Below, and Between – the book follows Harrison and Tabitha on their literal and psychic journeys to a new place in their relationship. Employing gruesome and chthonic imagery that function more as tonal metaphors than strict 1:1 translations, the monsters that our main characters confront are suitably daunting and there’s plenty of gross and ghastly set pieces that will worm their way into the reader’s mind. What keeps the proceedings engaging, however, is Slater’s obvious empathy for both of the main characters. The novel’s evident desire to explore how life’s unexpected changes affect both parties in the relationship keeps an emotional core to the novel even as the external events become wilder and wilder.

For fans of Danger Slater’s previous work, He Digs a Hole is another excellent novel by an author who excels at distorting everyday problems into sympathetic grotesqueries in order to grapple with and ultimately free the underling humanity. If the idea of spleenfruit trees and worms (so many worms!) gives you a shiver of anticipation, dive right in! For newcomers to Slater or even to Bizarro horror in general, however, He Digs a Hole is a fine introduction. It combines enough elements of horror and real life to provide a footing, yet turns the strangeness up to 11.5, so hold on.