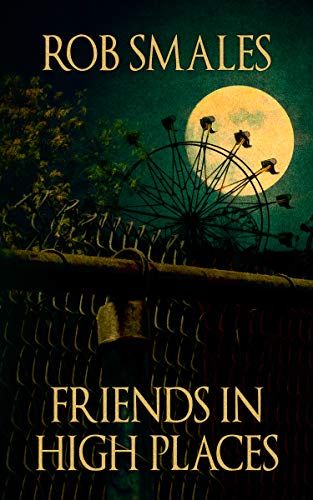 Whew! Just finished reading a new release from Bloodshot Books that chilled my bones pretty good. Friends In High Places by Rob Smales has nailed down a solid Five Star Review from this writer! For people who like the younger characters in Stephen King’s work mixed with the earnest honesty of the teenagers in S.E. Hinton’s The Outsiders, this book will scratch that itch for sure. If you’re familiar with what I’m talking about and the time periods those stories are set in, you know there weren’t any cellphones. Things are real as they can get in all their avocado green finery!

So when three boys get mixed up in what turns out to be a really bad plan, they can’t just whip out their cellphones, take pictures, or download things from the internet on the fly. Nope! Not in 1974! What these guys do is use the phone for the entire household. Those phones had cords, which inhibited privacy a great deal. When the phone isn’t available, they knock on each other’s windows, meet up in backyards, or deliver secret notes. I am mentioning this to give you a flavor of the time period that Friends In High Places takes place. Communication is possible, it just takes ingenuity.

There are the original three amigos: Ray, Jerry, and the narrator. They’ve lived in the same neighborhood their whole lives, in houses that are next to each other. As close as brothers, these guys spend the majority of their waking hours together riding bikes, playing games, and walking to school. Everything is fine as paint until a new kid moves into the neighborhood. Problem number one, Tommy doesn’t fit in at all. Problem number two, he’s desperate to be one of the guys and a simple “no” doesn’t seem to have any effect. The boys do all they can to give him the slip, but Tommy always catches up somehow.

To remedy this, the three guys come up with a doozy of a plan…Tommy will have to pass an initiation to become one of the gang. They figure he would never accept their dare, but he does and that’s when everything goes totally wrong. Soon people begin dying under mysterious circumstances and the police want to know why. Unfortunately, dead men tell no tales, and the boys made a pact of silence. With every new death, the narrator feels the whirlwind of lies getting dangerously close. Will he live long enough to tell the truth or end up like the others?

Friends In High Places is a fast, suspense-filled read that will keep readers on the edges of their seats. Smales’ characters are great! They’re easy to picture in your head and at times, you can almost feel them sitting next to you as you read frantically to find out what’s going to happen next. One character in particular has that effect, but I’ll let you figure out who that is! Friends In High Places, FIVE STARS, and another great release from Bloodshot Books! Excellent writing from Rob Smales, who also won the Preditors & Editors’ Readers’ Choice Award for Best Horror Short Story with Photo Finish. Be sure to follow his author page when you bop on over to Amazon to get your own copy of Friends In High Places.