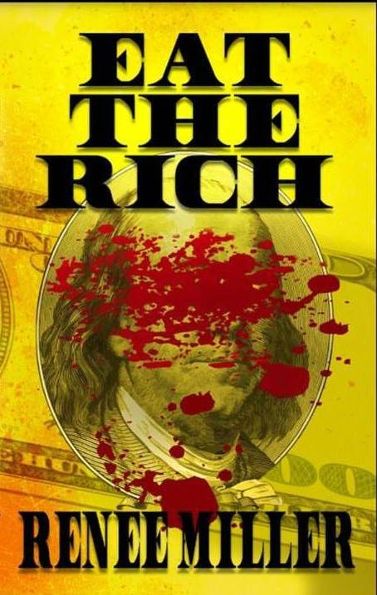 This is the book that caused a storm on social media recently when ARCs were sent out in actual sample bags. Some said class, others said crass. Meh. Personally, I love a gimmick, and you can only appreciate a publisher who not only puts out a quality product but also shows a bit of boldness and initiative and goes the extra mile to ensure their releases don’t fall by the wayside. The publisher in question is M. R. Tapia’s Hindered Souls Press, a relatively new start-up whose bold manifesto is to, “Showcase the perfectly weird, deranged, satirical, disturbing, and mind-bending fiction.”

With that in mind, it would seem that Hindered Souls and Tweed, Ontario-based scribe Renee Miller (authoress of Smolder, Cats like Cream, and Church, and that’s just in the past eight months or so) are a partnership made in heaven.

Or maybe hell, depending on your point of view.

When city slicker Ed Anderson sheds the trappings of modern life and walks out on his wife and job to forge a new, carefree existence living hand to mouth on the streets, he has absolutely no idea what he is setting himself up for. Because as well as contending with the expected empty stomach, bad weather, and general depravation, something has infiltrated the homeless community. Something deadly, dangerous, and other-worldly. Could it be the same ‘something’ that is systematically hunting down the rich folk in the area and apparently eating them alive?
Okay, yes. Yes it is. And I’ll tell you something else, it’s aliens. Aliens who look a lot like people, but with a few crucial, tell-tale differences. Like forked tongues with suction cups on them and an annoying habit of ripping people apart and sucking off their faces. These aren’t spoilers, by the way, because the book is called Eat the Rich and most of this information is given up in the blurb. Apart from the forked tongue with suction cups bit. The question isn’t what’s going on, that is made abundantly clear. It’s more what the hell is Ed going to do about it?

The set-up is intriguing, and the rest of the book doesn’t disappoint. It moves at a breakneck pace, the writing is concise and sharp, and the chapters short and punchy which I like, by the way. There is very little unnecessary exposition, and even less messing around. In fact, there’s barely a word wasted. You are dropped in the middle of a nightmare and before you know it you’re being swept along on the current like a used condom in a polluted river.
One of Miller’s strengths is character-building, and here, the MC doesn’t disappoint. You can’t help but feel a touch of sympathy toward poor Ed Anderson, one of life’s genuine nice guys who just took a few wrong turns and one day decided to stop giving fucks. All he really wants is a dose of fuzzy happiness. Then, through no fault of his own, he finds himself stuck between a jobsworth cop and a bunch of cannibal aliens intent on destroying the world.
I did have a minor issue with the alien’s clunky dialogue for the first few pages, until I realised it was supposed to be like that. And after that realization sets in, it makes them and what they do all the more chilling. There’s a weird, perfectly executed sense of detachment about it all which made me feel like some kind of intelligent cow reading about hungry people visiting an abattoir and the designs they would have on me and my kind. Not only very effective, but weirdly unsettling.

Eat The Rich is written in Miller’s trademark easy-going conversational style, with more than enough blood, gore, and cussing to keep her faithful readers happy. No sex, though. She must have gotten told off or something. Given the depth of the social commentary on display and the vein of sardonic humour running through it, all looming ominously behind an outlandish plot evolving around aliens versus people and the rich versus the poor, this is the kind of book a psychologist would have great fun dissecting and pulling apart. Much like the mind of the woman who wrote it, you would think. It all boils down to the fact that when the aliens come, and as we all know they probably will eventually, they won’t care if you’re a janitor or a millionaire investment banker, they’ll kill us all anyway.
If you like your horror twisted, dark, sharp, perverse, and rounded out with just a touch of the absurd, you need to get acquainted with Renee Miller’s Eat the Rich. It will blow your mind.

Chris Saunders, who writes fiction as C.M. Saunders, is a freelance journalist and editor from Wales. His work has appeared in over 80 magazines, ezines and anthologies worldwide, and he has held desk jobs ranging from Staff Writer to Associate Editor at several leading UK magazines. His books have been both traditionally and independently published, the latest release being a collection of short fiction called X3 on Deviant Dolls Publications.