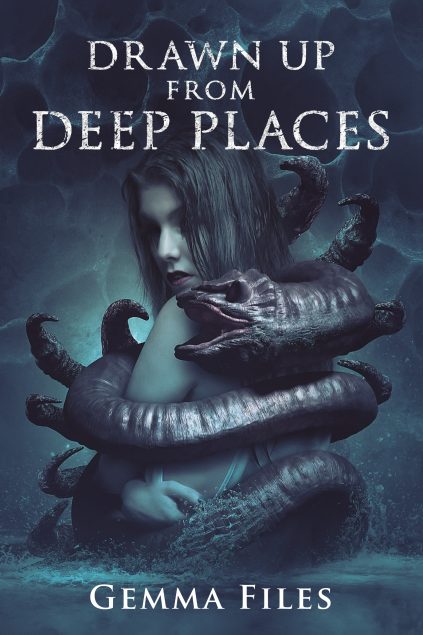 Drawn Up From Deep Places, acclaimed author Gemma Files’s newest collection and her second with Trepidatio Publishing, collects ten previously published tales. While Files’s exceptional skill with narrative structure, vivid description, and character insight are unrivaled, in large part these works veer more towards alternate-historical fantasy — albeit of a dark variety — than the kind of horror that some readers may be expecting. For those who are intrigued by Files’s forays into the fantastic, though, Drawn Up From Deep Places is a seductive and intoxicating read.

Readers who have come to Gemma Files’s work through her horror fiction may be caught off guard to find that most of the stories here are set in fantastical, alternate history timelines. Moreover, only three of the ten stories are truly standalone tales; the other seven belong to two story cycles and work together best when taken as a whole. Of these two cycles, the first consists of three stories and a novelette focused on magic-using pirates, while the other group includes three stories in the Weird Old West setting of Files’s Hexslinger novels. While this collection is an fantastic introduction to Gemma Files’s diverse range of work, readers should be aware of this before going in.

Of the three standalone stories, only one — the terrifying and uncanny “Hell Friend” — takes place in a contemporary setting. The other two are set during distant historical periods — a Roman sorceress’s villa in the rumbling shadow of Mount Vesuvius (“Villa Locusta”) and a Victorian asylum treating a strange amnesiac (“Jack-Knife”) — but even “Hell Friend,” which is set in Chinatown during Hungry Ghost Month, has ties to older beliefs and beings that pull it further from the present day. These stories are are intriguing, stepping as they do away from the standard modern-day settings and, in the case of “Jack-Knife,” utilizing a particularly effective screenplay-style format instead of narrative prose that swirls and spins the senses to mirror the character’s own confused mental state. Despite these departures and experiments, however, these stories are likely also the closest to the kind of “horror” that some readers may be expecting. They showcase Files’s seemingly effortless ability to build worlds and to peer into the lives of her characters, steadily escalating the tension and strangeness to a delightfully eerie effect.

Those sames strengths in world-building and character insight are also on full display in the two sets of dark fantastical stories collected in Drawn Up From Deep Places, although in these the stereotypical “horror” elements take a backseat. While the real heart of the collection is the story cycle involving cursed pirates, the Weird Old West stories retain enough of the genre edge to serve as a nice transition from the standalone stories into the larger, more sprawling fantasies. All of these, however, are proof of Files’s versatility as an author and will be a treat for readers.

As noted, three of the stories in this collection take place in a shared Weird Old West setting. The first two of these — “Sown from Salt” and its sequel “A Feast for Dust” — are tales of revenge, although Files resists the tendency of less critical writers to imbue this with some kind of simplistic redemptive aspect. Instead, the concept of frontier justice takes on an apocalyptic character as resurrected gunman Reese wanders from town to town as a sort of Cassandra that bystanders can’t help but provoke into triggering their own bloody karmic reckonings. Although the third Western story, “Satan’s Jewel Crown,” explicitly takes place in Files’s Hexslinger setting, there is more than enough context for new readers to feel right at home in this fresh take on the zombie-siege narrative that considers and critiques the concept of the self-made man (in more ways than one). It’s not hard to see in these stories a critique of the myths of violence and particularly frontier masculinity, but that they subvert tropes and expectations while still managing to pack a healthy genre kick of blood and two-fisted action is a testament to Files’s wide-ranging abilities.

The real backbone of this collection, however, is the set of stories circling around the pirate captains Jerusalem Parry and Solomon Rusk, seemingly cursed to be forever locked together through bonds of love and hate, desire and shame. Readers are first inducted into this world in the story “Trap-Weed,” where the wizard Parry, his haunted ship, and his shark-were servant Mister Dolomance are introduced as villains that have captured the unfortunate selkie protagonist. Although that story introduces the ghostly presence of captain Solomon Rusk and his dying curse that Parry never again set foot on land, the subsequent stories “Two Captains” and “Drawn Up From Deep Places” serve as prequels that flesh out the relationship between the two men, and their tale is finally laid to rest with the novelette “The Salt Wedding” (which, not coincidentally, ends the book).

With encyclopedic world-building, sensuous description, and more than a little heartfelt queer eroticism, Files crafts the vicious whirlpool spiral of these two men driven by passion and shame. Although dark and fantastical elements abound — there is sinister magic, a vengeful ghost, seductive sea monsters, and a glut of gore in the scuppers — it is the relationship and revilary between the two captains that is the focus and the main draw. One story asks “For what is life but a series of secret wounds, as well as what those wounds leave behind?”, which aptly sums up these tales, for we see the same characters again and again, each time coming to understand better the scars we thought we knew, deepening our empathy and our desire to see them through. Torn apart by one’s love and the other’s inability to accept love, Rusk and Parry consume and curse each other in turn until their destructive cycle draws in anyone unlucky enough to run across their ship(s). Handled with humor and sensitivity, but also the occasional bout of bodice- and/or jerkin-ripping intensity, these stories are character dramas more than horror stories. Despite a chill or two, there are unlikely to be any real scares here, but fans of historical fantasy, especially with queer romance elements, will find unexpected treasures here.

With the majority of its space given over to alternate-historical fantasy featuring pirates and cowboys, Drawn Up From Deep Places may not be the collection that readers who think of Files primarily as a horror writer are expecting. While that side of her work is present, the real strength of this collection is in the lush dark fantasy and brooding characters of her alternate Old West and high seas cycles. For those who are already fans of this side of her work, Drawn Up From Deep Places is a wonderful treat. For those who may not yet be familiar, this is an excellent introduction.