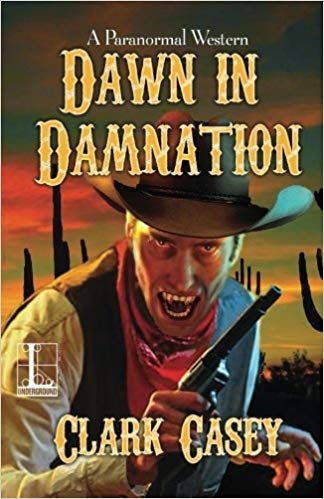 Are you tired of the same old horror novel full of angst ridden teenagers that seem to do everything wrong? You know, the ones where everybody is chopped to pieces by the masked weirdo with a machete/chainsaw/axe? I mean, there’s nothing wrong with that, but how about something different? Well, I’ve got the remedy for your boredom right here!

Dawn In Damnation is set in the Wild West circa 1930 for starters. Yes, it does contain a vampire and some werewolves, but Clark Casey’s version of these familiar icons is quite a bit different than the norm. His vampire goes by name Nigel and carries a gun in a holster, just like every other resident of Damnation. He also walks around during daylight hours because it is always dusk in this strange little town that serves as a waiting room between one’s death and Hell. Nigel is also quick to anger. If somebody gets in his way, look out! The werewolves are viscous and operate in a pack instead of being one unhappy loner. You don’t want to cross them either.

As our narrator Tom spins the tale, we learn that Nigel’s bad temper is caused by being hungry. Since everyone in the town is dead, there’s no fresh blood for him to drink. The blood from dead people makes him sick, so he can’t even squeeze by on that. The rest of the characters are classic Wild West gunslingers with a few odd ducks tossed in the mix. Most new arrivals don’t even last a day in Damnation before they are gunned down and sent to Hell. Legend has it that if you can get through a year without shooting someone or getting shot, you’ll be rewarded with entry to Heaven. Tom is doing his best to win that prize, when Buddy Baker rolls into town.

Besides being the narrator, Tom runs the local newspaper. It’s called The Crapper because that’s where everybody reads it. Shortly after Baker’s arrival, Tom has someone new to write about. Not only is Ms. Parker a woman, but she’s also pregnant. Buddy falls for her and deems it his job to protect her. Not just to defend her honor, but it is possible that the baby may actually be alive. If it is, then it’s a source of delicious and nutritious warm blood. Not only is the vampire mighty interested in a meal, so are the werewolves. Each makes plans in regards to the situation.

Meanwhile, various personalities arrive and depart Damnation. Tom writes about farmers, miners, card players with bad luck, and even some church folk. But the ones to really cause a stir are Mabel, a flashy and flirty lady of the night, and the very dangerous John Wesley Hardin. He’s probably the only person who’d have a chance at wiping out Buddy Baker and this makes for some tense moments. Especially because Buddy is more or less the good guy and Hardin’s got a heart colder than a meat locker. An interesting alliance is formed between Baker and an unlikely candidate as the action in Damnation picks up speed like a cart horse walking over a hornet’s nest.

What a fun read! Nice pace and Casey keeps every page interesting with a great cast of characters. The conclusion of this book is satisfying and makes room for a new book by Clark Casey, The Dead Indian Wars, coming soon from Lyrical Underground. The balance between humor and scares is perfect. The whole Wild West thing intrigued me and I was unsure if it would work. But I took a chance on this book and was rewarded with a very entertaining read. Unlike some books, I was kind of sad when I reached the end. This one is going up on the wall of fame for sure! FIVE STARS. Get yourself a copy of Dawn In Damnation and get ready to enjoy yourself!