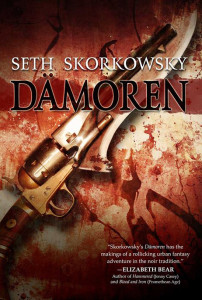 When you hear the words “urban fantasy”, what comes to mind? Chances are it’s nothing like what you’ll find between the covers of Dämoren. Seth Skorkowsky’s debut novel delivers a fresh take on the genre, eschewing many of its all-too-familiar tropes.

Dämoren wastes no time drawing readers in. It begins with a massacre, young Spencer Hollis frozen in fear as his family is literally and figuratively torn apart by demons. A mysterious stranger comes to his aid, only to discover that Spencer has signs of possession. From here the novel cuts to the present day and follows Spencer (calling himself Matt), now a demon-hunter like his rescuer before him. He becomes embroiled in a centuries-old battle between demons and the Valducans, a secret society devoted to eradicating them with the use of holy weapons. Matt’s combination sword/gun Dämoren, passed down to him from his mentor, is one such weapon.

The holy weapons are a focal point of the story, as they’re being sought and destroyed by an unusually organized group of demons. These weapons have their own personalities and special abilities, ranging from teleportation to super-strength. They’re bonded to their protectors, the Knights of Valducan, in a sort of symbiotic relationship, and are essentially main characters themselves. The rich history of the weapons and different types of demons drawn from real-world mythology make for a deep and interesting mythos. The world-building is well done, the action sequences creative, fast-paced, and very bloody.

Skorkowsky seamlessly blends genres here. Dämoren is suspenseful all the way to the end, its fantasy trappings infused with a strong helping of sheer horror. Parts of it (particularly the climactic battle, with its dark incantations and towering behemoths) read like a modern riff on the sword and sorcery genre. As for the horror, there are vampires and werewolves, but they’re monstrosities of the old-school variety. Alongside these genre staples are succubi, Japanese oni, Indian rakshasa, and all kinds of nasty nightmare fuel.

Of the many Valducans, only a handful have any sort of character development. The reason for this becomes clear, though, and the main characters are all likable and relatable in their own way. Their motives and relationships all ring true, and the in-fighting, humor, and mystery will keep readers hooked between the epic battles. A few scenes are heavy on exposition and technical details, but it’s not enough to impede the strength of the novel’s other aspects.

Dämoren is the perfect urban fantasy novel for those who don’t think they like urban fantasy, and genre diehards (as well as horror junkies) will enjoy it as well. Given its unique focus on weapons, demons, and the over-the-top action, it’s also a good choice for fans of anime and Japanese role-playing games. Any reader of speculative fiction should check this one out.