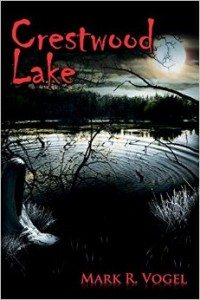 Crestwood Lake, the debut novel from Mark R. Vogel, is an impressive effort for a first time novelist. It is, at the same time, a unique take on horror fiction and an exploration of classic horror themes. Crestwood Lake is not only the setting of the tale but it’s main character, the different locales and characters part of a living and breathing whole. Due to the plot structure, which incorporates what are essentially short stories into a novel, the pacing is a bit uneven, but when the narrative focuses in the later stages of the book there’s no stopping reading until the climactic battle is finished.

The town of Crestwood Lake is located in New England, its roots dating back to colonial days and notorious Witch Trials of pre-United States America. The hauntings and horrors of the novel can be traced to the Puritan settlers who left Salem after its famous trials were ended. The legacies of those intolerant days manifest in contemporary times in the form of witches, demons and possibly Lucifer himself. The early stages of the book are told through different first-person narratives, often from the point-of-view of doomed characters. This adds an interesting element of peril to the story, as the first-person usually indicates a character has survived the tale, but here the reader never knows.

The idea of Crestwood Lake as the main character of the story is its most interesting and successful element. The different locations throughout the city, from the diner and local bar, to the church, wine store, individual houses and the lake itself are vividly rendered and clear in the mind’s eye. There are excellent specific characters, as well, though just a few get a full backstory and personality. The stories that diverge from the main plot deal with characters that are, typically, only present in the story for the short term, and by necessity, there’s isn’t a lot to those characters.

The main characters are interesting and sympathetic and well worth investing in. Captain of the local police, Butch Morgan, is an interesting blend of old-school tough guy cop and an empathetic, caring defender of his town. His friend and local historian Gil is a fun character: a retired writer and teacher and inveterate skirt-chaser. The two characters play off of each other extremely well, almost seeming to have the rapport of loving but always bickering long married couple. Potential love interest Vicki and the villain Van Haden are similarly strong characters that make interesting acrs through the novel.

Though the short story asides are not as strong as the main story, they don’t lose the reader’s attention. They may drift a bit but they are strong individual tales and, when the story comes fully together, do serve in setting up a strong horror tale. From haunted houses to escaped mental patients, witches to demons to the devil, Crestwood Lake is a classic horror story with modern sensibilities that has a little something for just about any reader.