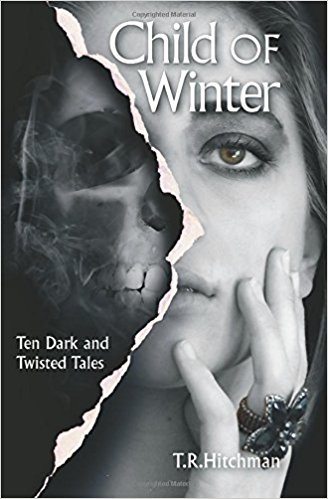 This is a collection of nine short stories and a novella that will chill the reader’s blood and keep you looking over your shoulder for something that isn’t there. Or is it? T.R. Hitchman offers simple, clean writing that draws you in and then slices you to ribbons.

In “Tell Me,” Robert is out taking a walk on the beach. It is a beach full of childhood memories and would be full of people if it weren’t for the fact that it’s January. But Robert likes a little solitude now and then from being henpecked. Just the waves rolling in, putting one foot in front of the other, a good place to clear the head. Until he sees a lone man looking so overburdened with depression that he appears to be dead. Well, Robert is “a good listener” and eager to help out this man he doesn’t even know to feel better. Never does it cross Robert’s mind that his actions may produce horrible consequences that will ruin him.

“Every Queen Deserves a King” is an interesting tale about a nurse with a special patient. Poor Hilary Robson is just trying to be a good nurse to a bunch of elderly patients who are heading towards the ends of their lives, when Charles Spencer is brought into her ward. The man appears to be at death’s door. He doesn’t move, just sleeps on his bed all twisted up in pain. Until his wife arrives and helps Charles to a fine meal of Hilary.

“Child of Winter,” the short story that is also the title of this collection, definitely runs strong to the unsettling. An older couple who were unable to have children find themselves idling about after retirement. No kids to stay in touch with or grandchildren to help out with leaves Angela feeling sad and disappointed. Meanwhile her husband makes work for himself to avoid just sitting in the gloom. Until the husband persuades her to visit a cabin owned by a friend for a little alone time for just the two of them. While still grieving for her lost son, Angela meets the children of winter out in the snow and joins them while her husband is napping. She is never seen again. Her husband tries to buck up and keep on, but he can’t. So he calls in his sister for help. She comes but it turns out that she knows a lot more about the situation than she is willing to tell her brother.

Have you ever lived in a house that seemed made just for you? I mean you could practically feel the thing embrace you when you came home! Oh, no? You haven’t? Well then consider yourself lucky not to be like the folks in “Bricks and Mortar.” It seems that this particular house sucks people into its destructive vortex by giving them the love that they’re missing. But nothing comes for free, including this house!

My favorite tale in this book is “The Eye of the Beholder.” Some things are not meant to be fooled with. Such is the case of a man named Will and his special camera that can turn accident victims into ravishing beauties again. Unfortunately, a ruthless reporter gets a hold of Will’s information and pushes him too hard. Not only does Nick start undoing Will’s kind work, he also bullies him. Until Will takes his picture to reveal the evil that dwells inside the rude reporter.

Despite its friendly sounding title, “The Homecoming” is anything but. A family of four living on an isolated farm is ruined by the daughter’s desires to have what she wants. First her Pa, then her brother fall under Constance’s spell and end up dead. She reaps her just deserts by birthing a dead child alone under brutal conditions. Fear and sadness drive her to abandon the incestuous child on the dirty, frigid ground. It disappears. Years later, a much older Constance is alone in the decaying farmhouse waiting out her days, when she’s approached by a young man. Turns out that he’s not exactly a stranger. In fact, what he really wants to do is return home and he will have his way!

Child of Winter is an intense book that will pull you into the darkness quickly. A very satisfying and unsettling read. I encourage you to give it a go! Just don’t expect to escape the cold touch of its author.