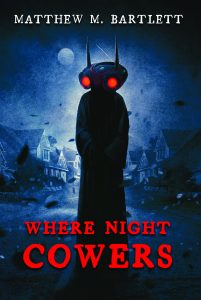 Matthew Bartlett has received a good deal of attention as a contemporary weird fiction writer, though I was new to his work before reading Where Night Cowers. I’m pleased to say that his talents are on full display in this new collection. Comparisons between Bartlett’s work and that of other talented writers like Ligotti and Padgett are probably inevitable given Bartlett’s subject matter and approach to the bleakness of life in a postmodern society, but I would also compare Bartlett to Mike Thorn, another new talent who takes a similar approach to his writing as Bartlett.

Because this is a meaty collection of nineteen tales, I won’t go into each of them in detail but will highlight some of my favorites. These reactions may seem just a tad disjointed because of the breadth of topics and themes that Bartlett writes about, but suffice to say that this is one of those incredible collections in which each story holds tremendous promise and offers a journey of discovery because they are each almost entirely unlike every other story in the collection.

“Effigies of Former Supervisors”: I absolutely loved this story. It’s a brutal, almost Ligottian, view of life inside modern white-collar workplaces. This one hit so hard because it’s so true to life. If you’ve ever had a soul-crushing job like this, “Effigies” will not simply resonate with you, but you will come to believe that Bartlett was one of your former co-workers. Bartlett pulled absolutely no punches on this story.

“The Museum of Laughter”: A meditation on the horrors and absurdities of life, literally from birth. The story’s opening is the most horrifying, but probably most accurate rendering of the perceptions of a newborn infant I have yet read, and then it goes on from there.

“Dr. 999”: A tale of body horror told via online customer reviews. What could be more viscerally true than such a thing in our consumerist culture?

“Provisions for a Journey”: This story was so good it hurts. Rickel is a hitman who works for very discriminating clients of an esoteric sort. You don’t want to be one of Rickel’s targets. He attends a child’s birthday party; there’s a piñata, and tragedy, of course, follows. I’m not going to spoil this one for you, but it’s got just the right combination of supreme weirdness, violence, horror, and cosmicism. Only a master like Bartlett could conceive of let alone execute something like this.

“Call Me Corey”: Corrine is an…unusual elderly woman riding in a bus full of senior citizens when the bus unexpectedly travels to Hell. If that premise alone doesn’t intrigue you, I don’t know what to say.

“We Pass From View”: Really, really good story. A man befriends the owner of a local used bookshop. He is unwittingly drawn into a terrifying occult conspiracy. While that may sound humdrum if you’re a jaded reader of horror, Bartlett paints such a vivid picture of this bookshop and its owner that you’ll recall every one of these same kind of little shops that you’ve been in over the course of your life.

“The Storefront Theater”: A lonely, isolated man growing increasingly financially desperate is drawn to a local stage theater where he is offered a job. Sinister. Oh so sinister.

“Deep into the Skin”: Wow. This one hit hard. A tattoo artist is forced to tattoo a large spirit board tattoo onto the flesh of an unwilling woman by several sinister occultists one night, then he is drawn deeper into their plans for the woman.

The collection closes with “Mikeytown,” which is one of the longest stories as well as perhaps my favorite. The premise is simple enough: Two old friends are taking a car trip when they stop off for lunch at a diner and have one of those unsettling small-town experiences that just gets weirder and weirder and more sinister by the minute. I love these kinds of inexplicable tales where the reader is just left to ponder what just happened. I really can’t say more about what they encounter in Mikeytown, as that would spoil the fun and the dawning realization, but this novelette is well worth the price of admission alone.

While many of the stories are explicitly set in the towns of Leeds and Hulse in Western Massachusetts, I don’t find the stories necessarily interconnected; my impression is that this is more of a geographic setting that Bartlett is slowly developing across his fiction.

If you have any interest whatsoever in contemporary weird fiction and cosmic horror, you’ve really got to check out Matthew Bartlett’s work, and Where Night Cowers is a great sample to start with. Bartlett is a terrific prose stylist, whose voice and choice of subject matter are unlike anyone else writing today. Highly recommended.