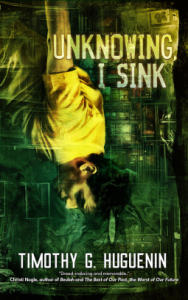 Unknowing, I Sink is an entertaining and quick read firmly in the realm of Lovecraftian horror (though it’s not explicitly connected with the Cthulhu Mythos). This novella was originally published by Independent Legions Publishing in 2020 but has been newly re-released with new cover art in an ebook format. Timothy G. Huguenin was a writer new to me, but I’m looking forward to reading more of his work.

Set in rural West Virginia, Unknowing, I Sink is the story of fifteen-year-old Julian, who finds a job cooking and cleaning for a wealthy eccentric who lives at the top of a mountain near his home. At first Julian’s concerns are pedestrian: he’s willing to perform drudgery because he simply wants to save up enough money to buy his first car so that he can impress a girl. But the more he works for the mysterious Mr. V, the more he realizes that something is terribly, terribly wrong.

Mr. V is an old man with some significant health problems (and eating habits, to say the least) who seems to be entirely homebound. He spends his days in his vast library, reading, thinking, and trawling through the internet while Julian cooks and cleans his moldering mansion. This is a pretty weird situation, though it pays well, but eventually Julian’s curiosity—and his need to impress a girl—get the better of him and he violates some of Mr. V’s strict rules. That doesn’t bode well.

This is a quick read with a fast-moving plot and polished prose. Julian isn’t exactly an intellectual, so he comes off as shallow, but that feels more intentional than not. The novella as a whole has a strong sense of verisimilitude, with the story of an ordinary teenager ringing true, though of course the tension and stakes ratchet up considerably when Julian gets sucked into a world of cosmic horror beyond anything he can fathom.

I’d have liked a bit more resolution of the story at its close, but sometimes the most satisfying stories are the ones where a weird series of events occur for reasons unclear to the reader and we’re just left to deal with it. Recommended.