Book Review: THOSE UNDER THE HILL 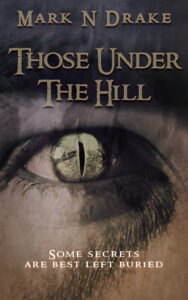 Those Under the Hill—a wonderfully creepy title—is Mark N. Drake’s latest novel set on the fictional Darkisle, a foreboding place inhabited by Lovecraftian horrors and cultists, and the setting of Drake’s previous novel The Gathering of Shadows, as well as several short stories.

This one picks up where The Gathering of Shadows left off: veteran of the Great War turned private investigator Jack Glennison is called back to Darkisle on a case to find a missing boy. It seems straightforward enough: A local doctor has reported that the boy has gone missing from the family farm, and the parents are acting oddly. Then Glennison learns that there’s a nearby abandoned mine that’s not quite so abandoned, and the missing boy’s father is dabbling with…things he ought not. Plus, there’s a strange watcher who observes the family, and he seems to be connected with the nearby Slee Top hill, which has a nefarious reputation for unusual events and disappearances.

I won’t spoil exactly what’s going on here except to say that Drake brings in several of my favorite beings/races from the Cthulhu Mythos and Jack Glennison gets in way over his head very quickly, though it takes him a while to realize that. We learn more about Darkisle’s sinister past and just how interwoven the Mythos and various cults and other factions are with the island’s history.

I always appreciate Mark Drake’s writing because his prose is clear and straightforward. The plot of Those Under the Hill is logical and proceeds apace; at no point does it hinge on Glennison or his antagonists doing something demonstrably stupid just to advance the plot. Glennison is a genuinely good investigator and Drake writes him that way—this is often a weakness of stories featuring detectives: the actual detecting is often given short shrift. Not so here. Plenty of action, as well as more on Drake’s take on the Cthulhu Mythos.

Are there times when I wish Jack was a little more shaken by the monstrosities he encounters? Maybe, but it’s clear that Jack Glennison is a two-fisted detective who’s not shaken by much. In his debut novel, we learned that Jack experienced something strange while at university, though we don’t know what, and in his first outing on Darkisle he ran afoul of a cult, and witnessed several arcane spells and summoned entities. So Jack does already know that magic and the Cthulhu Mythos are real at the outset of the novel. Needless to say, he learns a lot more about the Mythos in the course of his investigation here.

Definitely recommended for those interested in another look at the Cthulhu Mythos in the classic 1920s era, featuring a protagonist more interested in seeking out the Mythos and solving his case than spending too much time in Miskatonic’s Rare Books Room and fainting at the first sight of some eldritch horror.