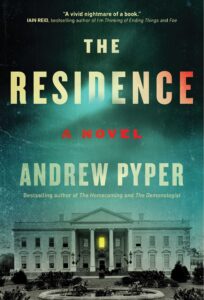 Award-winning author Andrew Pyper hit the ground running with The Demonologist (2012). Not his first novel—it was his sixth—that story grabbed readers around the world because it focused on a popular theme in supernatural fiction: rescuing a innocent from the jaws of darkness. The motif, with a twist, is the melody of his new work The Residence: the harmonizing element, the presidency of the United States.

Historically, Franklin Pierce—the 14th POTUS—was initially known as a moderate. His climb to one term in the White House (1853-1857) was easy. Viewed as a fence-sitting non-boat-rocker, this handsome man was seemingly a bridge between political parties and helpful as a calming influence on both sides of the growing extremism in the U.S., particularly the pro- vs. anti-slavery issue. This staunch Democrat married Jane Appleton, a strong-willed, uber-moral religious woman who came from a long line of Republicans. Pierce’s closest friend was the writer Nathanial Hawthorne. No one could have imagined that Franklin Pierce would become the most vilified president the country had ever seen. Here was the man whose policies led to the American Civil War!

Pyper blends the real and the fictional Franklin and Jane into a haunting tale that draws on the fascination with Spiritualism that began in the mid-1800s, capturing the attention of the FLOTUS. Most devotees of Spiritualism were drawn to it by a longing to contact via séance their beloved dead: spouses, parents, siblings, friends, but especially children who had passed over. Of their three children, all boys, all lost in infancy or early childhood, the Pierces are obsessed with their most recently deceased son, Bernie, almost a divine child in their eyes. His shockingly fatal accident coincides with Franklin’s ascension to the White House. Jane, traumatized on all fronts, desperately wants to bring her son back from the dead.

This story is a clever setup: a mourning couple who cannot come to grips with the loss of their special child, while at the same time struggling to adapt as they are catapulted to the top of the most powerful institution in the world. The White House, which Jane hates living in as much as she hates Washington, DC, is the third main character in the story. It is not only a residence for the First Couple, but also houses the entities that Jane packed in her trunks for the move. These new demons blend well with the souls of the dead already inhabiting the haunted mansion.

The tone of this riveting tale is both melancholic and macabre. Franklin and Jane as grieving parents evoke sympathy. Yet neither Jane, plagued by ESP since childhood, nor Franklin, overwhelmed by a position for which he is eminently unsuited, possess the fortitude to stand up to the preternatural—until they do. But demons feed on fear.

Fact and fiction blend seamlessly in The Residence, and it would take a scholar specializing in the Franklin Pierce presidency to identify which is which. Pyper excels at characterization, and that’s what gives his work power and depth. These characters feel like real human beings, and that only exacerbates the horror with which they must contend. The novel is personal: parents locked in grief; trapped in a house that they cannot retreat from; unable to put a halt to the abomination called slavery; under the thrall of the increasingly menacing supernaturals that the two, in their naivety and pain, called up. It’s a spooky tale, written to imitate the style of the day, set within the accoutrement of elitism that opens a door to the world, and at the same time slams it closed. Pyper is always worth reading and this novel, released in the fall of a U.S. election year, could not be more timely.