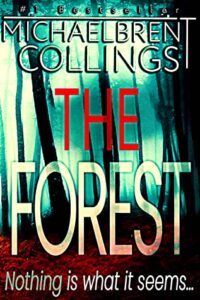 Michaelbrent Collings is known for being an extremely prolific writer of horror and thriller novels. Most of these have been stand-alones, and while they all contain plenty of weirdness, most don’t contain supernatural elements; Collings tends to write effectively menacing stories about ordinary people being thrust into terrifying situations beyond their control. His new novel, The Forest—a story about a nice young couple with a tragic past forced to enter a mysterious forest that would terrify a team of Navy SEALs—is a fascinating novel that mostly fits this mold, but it also leads up to a shocking climax that’s a great example of truly existential horror.

This is a story of three (at least) interwoven chronologies. Tricia and Alex are a young married couple who have experienced great loss in their lives. When they were teenagers, their best friend Sam disappeared in a mysterious forest and was never found again. They know that they tried to rescue Sam from his crazy, abusive mother in the forest, but their memories are spotty, uncertain, unreliable. Years later, Tricia and Alex have married and had a son, who they name Sammy in honor of their lost friend. Tragedy once again befalls the family near the same forest where they lost their friend Sam. Now, Tricia and Alex have returned to the forest in an attempt to discover what happened, and gain some closure. In order to do that, they’re going to have to venture back into the forest that has taken so much from them.

This one began as what I thought was going to be a “standard” haunted forest sort of novel. You know the kind: nice people (or highly annoying people, à la The Blair Witch Project) venture into a forest where everything isn’t what it appears. They get lost, encounter ghosts or witches or a serial killer or something similar, get chased around for a while, then the survivors eventually make their way out. Collings is a good writer—his work is very much a known, quality product in my experience—so I knew he would put an entertaining spin on what I expected was a routine sort of plot. That’s not at all what I got. Up to about the 90% mark, I truly thought that it was going to be an interesting but familiar sort of story. But I carried on because I had faith in Collings to close the story out in a satisfying manner. Then the novel turned into a truly disturbing existential horror novel, the likes of which I have not seen Collings produce previously. I don’t dare describe how the narrative shifts, or what the outcome of that unexpected ending is, because that would ruin all the fun, but I will say this: it’s worth sticking with this one to the end.

There are some clear strengths here. While characterization of the major characters isn’t deep, it’s more than sufficient, and if you were one of those gifted and talented kids in high school, or knew some of them, you’ll find yourself on familiar ground. We’ve also got an interesting setting, a set of enigmas for the reader to puzzle through along with the characters (trust me, you’re not going to figure it all out, but that’s okay, all part of the fun), and a clever narrative that moves seamlessly—but not confusingly—through the different chronologies. Action and pacing are steady and keep the plot from bogging down. Atmosphere runs the gamut from mildly unsettling (outside the forest, because of the sense of wrongness), to overt menace within the eponymous forest.

I recommend this one especially to aficionados of cosmic and existential horror. Because of the need to avoid spoiling the novel’s climax and resolution, I cannot be specific about what you will experience at the end of the novel, but I found it very much worth the wait. I didn’t see this one coming, and can only say that it’s a real gut-punch of an ending. Haunting, and thought-provoking. Definitely recommended.