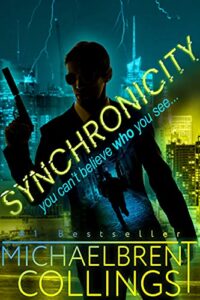 Let me start off by saying that Synchronicity is a bit of a departure from what I consider to be Michaelbrent Collings’ stock in trade: slow-burn horror. I’d say this one edges over more into thriller material, though it’s certainly got enough violence and weirdness to appeal to many horror fans. Set in the present day, this is the story of Tyler “Book” Malcolm, a happy-go-lucky con artist with mild psychic abilities who gets a major boost to his powers and then must outrun a horde of government agents and a madman named Kane who is on a quest to become a god.

I can’t help but compare this one to The Matrix in some ways. We’ve got a relatively ordinary guy (more on him below) plucked from a mundane existence, who becomes gifted with amazing powers by a couple of mentors, and then gets thrust into a life-or-death struggle with powerful forces who share his newfound abilities but who mostly outclass him in every way. A pretty classic framework that Collings has fun playing with.

Book isn’t a bad guy, he’s just a bit of a go-along-to-get-along kind of guy who’s looking for a good time in life and is unafraid to use his (subtle) psychic gifts to con people out of a little money that they can spare. He’s got a troubled past and lives mostly off the grid, with only a few people he cares about, but even with those chosen few, he keeps them at arm’s length.

Two mysterious strangers—Axel and Jade—make contact with Book and enlist him in their cause: fighting against the monstrous Kane, who possesses nigh god-like powers and has access to almost limitless resources. Axel has invented a machine that enables its users to gain control over another person’s body, effectively possessing that person and permanently absorbing some of their knowledge and skills. Kane also has this ability, and will do anything to kill the trio and steal the machine. And by do anything, I do mean anything, no matter how heinous. Kane is a psychopath on what he sees as a path to godhood; he’s truly willing to kill and torture anyone who poses even the slightest obstacle to his goals.

The action is fast and furious, with lots of excellent pursuit and combat sequences. Pacing is tight; it takes a few chapters to get into the rhythm and understand what’s going on, as Collings doesn’t spoonfeed the reader, but it never slows down. Characterization is generally good, though there are a few characters, including Book and Kane, whom I’d like to know more about—more details on their backstories (e.g., more on Book’s awful childhood and why/how Kane embarked on his quest for godhood) could only have enriched the story. I will admit that there was a point in the novel where I worried that Collings had violated Wells’ Law (which urges that there be a single fantastical assumption made in a story); after all, here we’ve got psychic powers, body swapping, and Matrix-like time dilation combat. But I realized that it all works together. The ending sets us up nicely for the further adventures of Book and company, so I’ll be curious to see if Collings follows this one up with a sequel.

Recommended, especially for those looking to mix body swapping and frenetic combat.