Book Review: OF ONE PURE WILL 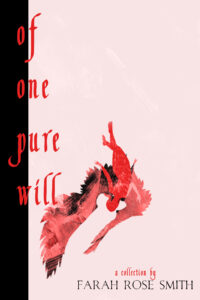 Farah Rose Smith’s weird fiction collection Of One Pure Will has just been re-released by Trepidatio, and I’m happy that it will now reach many more readers.

On the surface, this is simply a collection of twenty-three stories. But these aren’t the kind of stories you might be used to. Jeffrey Thomas provided an excellent introduction to the collection in which he compares Smith’s work to that of Joe Pulver and Wilum Pugmire, as well as Smith’s husband Michael Cisco, which I think is a very fair (and complimentary) comparison. Smith doesn’t write about the Cthulhu Mythos or Chambers’ King in Yellow the way that Pugmire and Pulver did, but in terms of Smith’s orientation as a writer who focuses on tone and atmosphere and storycrafting, rather than straightforward narrative and plot, for the most part, I think this observation is spot-on. Thomas describes fiction as mostly being oriented toward seeking to achieve “event or effect.” This is a comparison between a plot-driven narrative—mostly not what Smith is trying to achieve here—and an effect that the author (Smith) is trying to evoke within the reader. I found Thomas’ discussion to be very helpful here; it’s certainly not to say that plot-driven narratives can’t achieve emotional effects on the reader too, of course. But I found Smith’s storytelling to be unconventional. She truly has a unique prose voice.

Smith’s voice, atmosphere, and major themes are worth discussing at some length because they contribute so strongly to Of One Pure Will. If I had to choose one word to describe the stories as a whole, it would be “dreamlike.” Not “nightmarish” though—these are not about protagonists encountering literal monsters (for the most part), or surrealist nightmare-scapes in which they’re fleeing unspeakable terrors—but they have the quality of unsettling dreams that leave you with a vaguely bad feeling that follows you through the day. Matthew M. Bartlett used the term “oneiric” to describe this collection, and I’d concur. These are not conventional horror stories, but dark or weird fiction in the truest sense, i.e., stories that evoke unease or nameless dread. These are not the kinds of tales in which monstrous entities lurk and threaten to tear their victims asunder, or even appear on the page as concrete if psychological threats. Smith’s protagonists are often dislocated, or cast adrift in realms where reality seems to differ from the more familiar; these could be dream realms or something else. Many experience discomfort, or are discomfited by the strange circumstances in which they find themselves. Loss seems to be a common theme, as does mourning and grief. Depression, stagnation, obsession, and stasis (in a negative sense) also seem common.

In “Sorcerer Machine,” Conrad (Connie) Dubrovsky is a linguist working on translating a series of enigmatic letters that will reveal some secret knowledge that, perhaps, is connected with a mysterious black cabinet in his family’s possession. Connie visits his sister Gina’s remote farm after the death of her husband and encounters…something in the fields that ties everything together. This one was unusual in the collection because of its somewhat more overt cosmicism, but I found it even more effective because of that.

There’s a note that Smith’s “A Delirium of Mothers” is based on a true story; that is sad news indeed since the story drips with grief, mourning, and sorrow. A married couple moves into an old farmhouse after the death of their daughter, who died just before she could be born. They find an old grave of a girl who killed herself at the home decades previously. This is not a happy home or household, to say the least; it is the story about PTSD and unresolved trauma, grief, mourning, and loss that seems almost inconsolable. Powerful.

I found Smith’s “The Irrational Dress Society” to be almost whimsical, though it oddly reminded me of Ligotti’s work, or what he might write were he more interested in whimsy and absurdism. Set in pre-Revolutionary Russia, this is the story of a group dedicated to the wearing of ridiculous garments. Smith’s writing isn’t always about slow, creeping dread and the loss of self and others—she’s more than capable of crafting engaging stories about even stranger subjects.

If you’re interested in atmospheric, unsettling weird fiction in a unique voice, I would urge you to check out Farah Rose Smith’s Of One Pure Will.