Book Review: IN THE HAUNTING DARKNESS 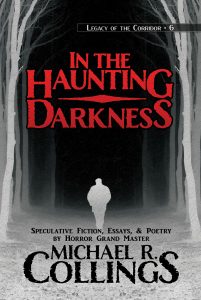 Michael R. Collings is one of those writers who doesn’t get nearly the attention that he deserves. A retired academic, he has written extensively on the work of Stephen King, Orson Scott Card, Milton, and many others. He’s also a talented poet and horror writer. And, not least of all, he’s a three-time Bram Stoker Award nominee and World Horror Convention Grand Master. With In the Haunting Darkness, Collings has recently published a new collection of essays, poetry, and short stories. Even if (maybe especially if) you’re unfamiliar with Collings’ work, you should give this one a try.

In the Haunting Darkness is organized in three main sections—essays, prose, and poetry—that vary considerably by topic and theme. The essays cover topics as disparate as the horror genre itself (and why literary snobs ought to pay it greater respect) to Frank Herbert’s Dune to writing tips that we all (regardless of the genre we work in) can benefit from. The essays are interesting and insightful reflections from someone who has been immersed in the genres of horror and science fiction, writing about it critically as a literary scholar, and writing his own horror fiction for most of his life. They’re very approachably written—by no means does the reader have to be a scholar to get full enjoyment out of any of these essays—and I think that any serious fan of genre fiction would enjoy these useful and thought-provoking essays. Included is a set of essays on the building blocks of good writing that we can all use an occasional refresher on. Collings provides us the simple, clear, pragmatic foundations we need for constructing the prose needed to effectively tell our tales of horror. As a horror writer, I found several of Collings’ essays especially helpful in cogently framing the essential elements of horror fiction and offering tips and suggestions for improving one’s own writing.

The prose likewise varies considerably in content, from horror and weird fiction to science fiction and everything in between. One of my favorite pieces is the novelette that formed the basis for Collings’ novel Shadow Valley. Here we have the very sad history of a polygamous Mormon family in an isolated community and what became of the women left behind as the family dwindled over time. The rest are a genre mix of horror, science fiction, and humor with fantastical elements (see “Dame Ginny McLaserbeam and the Dastardly Duke”). It’s all very well-written as Collings’ work always is, and a good sampling of his varied output as a prose writer.

Collings is known not only for his path breaking work as a literary scholar on Stephen King and several other important writers and as a writer of fiction himself, but also as a poet. While I personally lack the talent to really discuss poetry in a serious way, I can attest to the breadth of Collings’ poetry included here, which varies from cleverly humorous limericks to epic poems, and everything in between. All the genres noted above are featured prominently in this collection.

Collections this broad in terms of content, themes, and even formats like In the Haunting Darkness can be hit or miss, their breadth almost ensuring that some of the contents won’t work for all readers, but there’s a great deal here that is deeply engaging and useful for a wide array of readers. Recommended.

Let me also give a quick plug for three of Michael Collings’ horror fiction novels (these can be read as stand-alones in any order: The House Beyond the Hill, Static, and The Slab. I enjoyed each of them immensely and am always delighted to introduce new readers to Collings’ work.