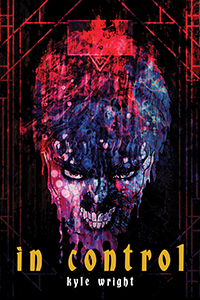 Katherine is most definitely NOT in control of herself in Kyle Wright’s new short novel In Control. She is a young woman in a big city, going to college, trapped in a dead-end retail job to pay the bills, and experiencing increasingly terrifying hallucinations. Or are they hallucinations? Is she going slowly mad? Is something inside her body? Is something trying to take possession of her? Has she been infected in some way?

A story like this revolving around the interior life of a single character (and how that comes to impact every aspect of her life) depends on having a fully realized character. No worries there, Wright has crafted a character more detailed and realistic than some of my actual acquaintances. Katherine is far from perfect—she drinks too much, she smokes too much, she’s depressed, she’s disconnected from her friends and family, she’s just barely getting by in her college classes and dead-end job—but doesn’t that describe most of us in different ways?

Katherine is juggling relationships with her mother and friends (who always seem to have much more disposable income than her), her college studies, and a soul-crushing job in retail that describes customer interactions that are so atrocious that they could only have been penned by someone who experienced those things personally.

The hallucinations (or horrific experiences, or visions that only Katherine can see) are wonderfully visual, and I very much got a Jacob’s Ladder vibe several times when she experiences these things—I could immediately see In Control translating onto the big screen. Several passages in In Control were genuinely terrifying, and clearly demonstrated Wright’s mastery of the genre.

Katherine gradually begins to be driven by new urges, some merely unsettling and some potentially dangerous or destructive, like her increasingly short temper and her newfound impetuousness; these urges become increasingly more violet. Is she going mad, or is some external force doing this to her? Is something invading and transforming her own mind and body? Is she still in control of herself, her body, her life, or is she spiraling out of control, pushed aside by growing madness or something (some thing) else? The novel’s resolution is extremely effective, though I won’t spoil that here.

Wright’s prose, characterization, and pacing are extraordinary. He’s a wonderful writer and In Control is a great story. Highly recommended.