Book Review: HIS OWN DEVICES 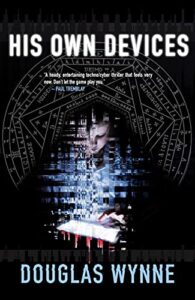 His Own Devices
Douglas Wynne
Promethean (2021)
Reviewed by Andrew Byers

Jessica Ritter has her hands full caring for her ten-year-old son Gavin while her husband Matt is deployed to Afghanistan. Gavin’s a good kid, and is certainly technologically savvy, though like a lot of parents, Jessica worries about balancing Gavin’s screen time, his isolation during the summer months, and his passion for a new game (Rainblocks) developed by Gavin’s favorite YouTube influencer, Rainbow Dave. Dave is a pretty wholesome figure in Gavin’s life: his multi-colored Mohawk and cheery, kid-friendly persona have won him millions of fans. But Jessica grows concerned that Gavin is hiding something about his new game, and worries that maybe Rainbow Dave is not quite the innocent, dorky game developer he appears. It soon becomes apparent that Dave himself is the pawn of sinister, shadowy forces seeking to cause havoc, with truly existential implications for Gavin and Jessica.

I came to Wynne’s work having read just a single novella in his SPECTRA Files series, which blends real-world occultism with Lovecraftian horror, and was hoping for more of the same. I wasn’t disappointed. While I would describe His Own Devices as a technothriller, it has clear horror elements, and an ambiguous element that could be supernatural (I think that ambiguity is one of the novel’s strengths). Wynne seamlessly blends postmodern technology with real-world occultism. There’s just enough here about John Dee, Edward Kelley, Enochian, and the demon Choronzon (with ties to Crowley and other esoteric elements) to whet your appetite without getting bogged down in minutia. While the story of His Own Devices wraps up satisfyingly, there are enough unresolved elements here that I’d very much like to see developed further.

Wynne is a marvelously naturalistic writer who has crafted a set of characters that seems fully realized, with perspectives from Rainbow Dave, Jessica, Gavin, and Gavin’s computer teacher, Mr. Strauss. These are all eminently relatable characters (including Dave, whose mental health spirals down precipitously during the course of the novel). It’s clear that Wynne writes from experience, especially with regard to parenting children today and worrying about how they interact with technology. Wynne managed to draw me into these characters’ lives, their hopes, their fears, their day-to-day stresses in a way that few other authors are able. It may be trite to say, but Wynne’s characters genuinely seem to “come alive,” and that’s probably his clearest strength as a writer.

I would be remiss if I didn’t mention that Wynne has written a prequel novella to His Own Devices entitled Random Access that is available free from his website. It was written after His Own Devices, and Wynne suggests reading it after the novel; having read Random Access—an excellent read in its own right—I agree that it’s probably best to read that second. It does a great job of providing the backstory for Rainbow Dave, more on the Black Flock, and generally enriches the story, but I don’t think you should read it prior to His Own Devices.

Highly recommended. If you’re already familiar with Wynne’s previous work, you already understand his strengths as a writer. If, like me, you’re newer to Wynne’s work, you’ll definitely want to check this one out. I’m putting Douglas Wynne on my (short) list of must-read writers.