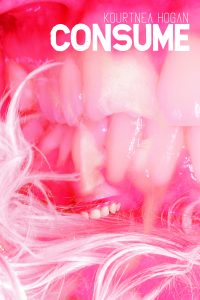 Consume is the story of thirteen-year-old Tegan, a girl with highly identifiable social and body image issues. Tegan is dealing with the trauma of her mother’s recent death due to cancer followed by her father’s decision to move to avoid the ghosts that lingered in the house they used to share.

In her new school, Tegan has decided that she is unlikeable and unpopular. She is committed to this persona until Rileigh, a beautiful, popular girl, takes Tegan under her wing. Tegan is never convinced that Rileigh truly cares for her. She is never fully confident that they are best friends, and she craves proof of their bond. While most girls that age invest in split heart necklaces, Tegan wants more than an external token. She wants something permanent, some internal substantiation, so she begins eating strands of Rileigh’s hair.

As Tegan consumes the hair (and little more in the way of sustenance due to a fear of being overweight) a new girl enters the school. Charlie is a cool goth and she quickly makes a trio with Tegan and Rileigh. Rileigh has also convinced Tegan to begin dating, something she has no desire to do. The dating situation quickly becomes abusive and menacing, leaving Tegan distraught and longing for more of Rileigh’s hair.

Consume is well written and is an interesting portrait of the angst of adolescence and how that can quickly tip into dangerous territory when real loss and grief is mixed in. The character of Charlie was a strategic addition to the story, as Hogan uses her to demonstrate the incongruence between Tegan’s perception and reality.

The issues of survivor guilt, separation anxiety, body dysmorphia, asexuality, and abusive relationships are handled with great care and with realistic scrutiny. When the book shifts to bizarro, it felt a bit sudden, even though it had been marketed as such. I enjoyed the bizarro parts, it just might have felt less abrupt in a short story, as opposed to appearing at the very end of this lengthier work.

Consume is an engaging read. It is easy to sympathize with Tegan while also wanting her to start striving to be her best self. While the main characters are teens, it is not aimed at a YA audience. Instead, it makes one grateful for having survived adolescence.