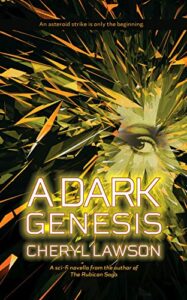 The colonists and crew of the Vega Four were sent into space a century ago, along with a small fleet of other slower-than-light generation ships, to seed humanity in other solar systems. For now, though, the inhabitants of the Vega Four are lonely and isolated in interstellar space when disaster—a serious asteroid strike and its aftermath—places them in mortal danger.

I must provide a few plot spoilers if I’m to say anything about the plot at all. The asteroid that crashed into Vega Four contained some sort of crystalline alien life. That would be intriguing enough, but then the protagonists discover that this lifeform is aggressively expanding and, as an intelligent crystalline parasite, is more than capable of defending itself. Plus, the unchecked growth of this lifeform will soon compromise the integrity and life support of the ship, dooming them all to a quick death in the deep void of space unless they can figure out how to stop it.

I was intrigued by the ship’s culture, which seems to have emerged during the last century of its isolation from Earth: there seems to be a fairly sharp divide between the civilian colonists—who are awake and not in any kind of suspended animation—and the crew, who have come to regard the passengers as nuisances as much as anything else, and paternalistically surveil and discipline every aspect of the passengers’ lives. They have gone so far as to have an A.I. that listens to conversations and issues demerits every time it detects a curse word. Some among the passengers suspect that they’re being drugged into docility. Lots of tensions between the two groups, which significantly contributed to the difficulty of finding a solution to the existential threat the ship faces. It’s clear that resentment is building and I doubt that this will produce a stable society once they reach their destination.

I would have liked to learn more about the backstories of the major characters. For example, at the outset of the novel, one of the characters, Sage, has discovered some important information about the alien lifeform and tries to share this with the ship’s officers. They dismiss her out of hand, regarding her as little more than a hysterical crackpot; there’s clearly history here between the characters, and I’d have liked to see more explanation of that.

This short novel is fast-paced and a quick read. Characterization wasn’t deep, but it’s a fun science fiction horror-thriller set in space, with a rapid pace that relies on quick thinking and some basic scientific knowledge to resolve rather than laser guns and action heroes. Recommended especially for those who enjoy some light horror mixed into their science fiction.