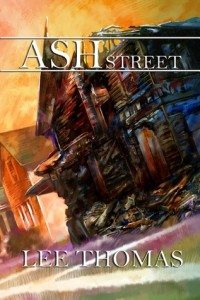 Let me go ahead and get this out of the way: Ash Street is one of the best ghost stories I’ve ever read. It’s gripping, scary and full of unexpected moments. There are a multitude of reasons why it works as well as it does: well-written, engaging prose, unpredictable characters, a gripping plot that’s kinda like a horrific who-done-it, but what I enjoyed most were the ghosts themselves. They manifest themselves in different ways, but each is creepy, haunting and unique.

Unlike some contemporary supernatural reads, Ash Street doesn’t get bogged down by the perspective of the specters themselves. Instead, we see the action entirely from the point of view of flesh-and-blood characters, many of whom are visited by the deceased. The dead were all murdered by the same set of serial killers, but instead of trying to extract vengeance on their murderers (both of whom are alive and in prison), they’ve chosen to torment living loved ones. The ghosts effectively mix facts with lies, using emotional baggage, unpleasant history and weaknesses of character to incite more murder.

From an adolescent brother haunted by his vengeful little sister to a wife who blames her husband for her untimely demise, the mystery surrounding their return kept me guessing and, yes, frightened, throughout the book. Also, these spooks don’t play by traditional ghostly rules. They move freely from place to place, appear any time of day and can be seen by anyone. (Just wait until the scene where a murdered girl crosses a busy street in broad daylight – it’s as creepy as it is surprising.)

But as great as the dead are, it’s the living that really make this book worth reading. What at first seem to be predictable, cliché characters turn out to have a surprising amount of depth. Their relationships and motivations are complicated and detailed, so what at first might seem like a banal character – an attractive young female star of a cheesy, Ghost Hunters-esque show – become engaging and relatable (she hates her boss and coworker and could care less about fame and fortune).

But like most mysteries, once everything is revealed the tale looses a bit of its oomph, though I appreciate the rationale and mythology Thomas created. Sure, there are a few unanswered questions and minor plot holes (which I won’t point out because doing so would ruin the book for anyone who hasn’t read it), but overall Ash Street is an excellent, engaging book that should be a must-read for any fan of supernatural horror.