Advance Review: THEY WERE HERE BEFORE US 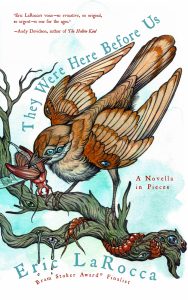 They Were Here Before Us: A Novella in Pieces
Eric LaRocca
Bad Hand Books (October 25, 2022)
Reviewed by Andrew Byers

Eric LaRocca is a hot commodity in the horror world right now, and as of this writing, They Were Here Before Us is his latest. Having read and reviewed LaRocca’s We Can Never Leave This Place, I had some idea of what to expect from his writing. In sum: this is a disquieting work. He calls it a novella in pieces, though I would probably describe it as a collection of six thematically-linked short stories that don’t really form a cohesive novella, at least not as I conceive of the format. In any case, this is a collection of disturbing tales in the way that LaRocca has become well known. It’s not for the faint of heart, particularly if violence by and against animals bothers you, but I thoroughly enjoyed it.

Please note that mild spoilers follow—without giving you at least a sense of what these stories involve, I’d have very little else to say about the collection.

“All That Remains Is Yours to Keep”: Told from the perspective of a young insect that has been hatched inside a human corpse, this one explores those feelings of home and love for the flesh of this woman who has nurtured him. Outlandish, of course, but if that basic premise is as intriguing to you as it was to me, then read on. If a story like that would bother you, this one may not be for you.

“Delicacies from a First Communion”: Told from the perspective of a chimpanzee owned by Edgar, an eccentric who has died. Edgar’s lover Cy hates the chimp and has left it in its cage to starve to death. A savage tale of revenge.

“A God Made of Straw”: Told from the perspective of a mother bird who has made her nest and laid her eggs on the shoulder of a scarecrow. She and her eggs are tormented by a sadistic young boy. Another tale of unspeakable cruelty and, perhaps, just desserts.

“To Hurt the Weakest One”: Told from the perspective of a female meerkat who has joined a new meerkat colony with different values from her own, then given birth to a litter of babies. Again, a story about cruelty and justice.

“Bird and Bug Are Happy”: Bug and Bird are two (human) women in the twilight of their lives. Theirs has become a sad marriage: Bug works at a suicide prevention call center and Bird, formerly an artist, is in the latter stages of dementia and becoming increasingly unmanageable. The pair struggle to regain their shared happiness and, in so doing, tragedy ensues.

“When It’s Dark Out”: Marcus Dove and his son Julian are traveling to visit Marcus’ husband (and Julian’s other father) when they are forced to stop at a deserted spot on the road. Monstrous, cosmic horror, as well as plenty of body horror ensues, along with an exploration of the survival instinct, struggles with fatherhood, the strain that having a child can place on a marriage, and the negative feelings that parents can have for children.

I was fascinated by these stories, even while I was disgusted by much of some of what I read. I knew that to be LaRocca’s intention, and I read on with a sick fascination, knowing that LaRocca was going to continue to surprise and disgust me. If the hallmark of good art is to evoke an emotional response—and I think it is—then They Were Here Before Us is indeed a fine piece of art. Just know that you will be subjected to cruelties inflicted on (and by) animals. As Tennyson said, “Nature is red in tooth and claw,” and that’s nowhere more evident than in They Were Here Before Us.

All in all, this is a wonderful collection, again, assuming that you don’t have a strict violence against animals policy. In watching films, I’m one of those people who doesn’t mind violence against humans but it really bothers me when, say, a dog is killed. But even so, these stories were very enjoyable, and this collection is definitely recommended.