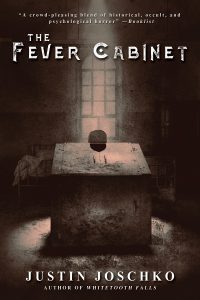 I don’t know about you, but I’ve always found historical treatments of mental illness to be especially horrifying. (Heck, contemporary treatment of mental illness remains pretty scary.) I mean, these so-called doctors gave us horrific “treatments” like electro-shocks, forced sterilizations, and lobotomies, among many other practices in the asylums of old. Along with something called a “fever cabinet,” which I wasn’t familiar with, but I’m getting ahead of myself.

Canadian author Justin Joschko has set The Fever Cabinet in Canada in 1940 at the outset of the Second World War, and it follows the experiences of German immigrant Roland Hellmich, who has emigrated to Canada seeking employment opportunities but finds only prejudice, hardship, misery, and isolation in his adopted home. Things go from bad to worse when he is forcibly committed to an asylum—trust me, you would not have wanted to be committed to an asylum in 1940—and falls under the care of Dr. Verloc, a sadist with truly dark designs, and the goon squad of orderlies that runs roughshod over the inmates.

Without the aid of a friendly nurse, Martha Donnelly, Roland would have been lost. He’s quickly “diagnosed” as a syphilitic—Roland is in fact perfectly healthy—and sentenced to be treated in a device called the fever cabinet, which I had to look up to get a clearer sense of what this thing was. Like a lot of early twentieth-century mental health treatments, it’s terrifying (and it’s a real device that was used by physicians; you can find photos of it online). It looks kind of like a physically imposing iron lung or sealed casket, with the patient’s body lying prone, locked inside a sweat box with just the head sticking out. And yes, some doctors in this era really do seem to have thought that by increasing the body’s internal temperature significantly for hours on end, they could somehow cure a patient’s afflictions. All the fever cabinet does is to send Roland deeper into his own mind, where he is beset by terrible dreams or hallucinations. These visions turn out to be more than just simple fever dreams, however; they impart knowledge of what’s really going on here at the asylum, a place where too many patients die or go missing.

Roland and Martha come to realize that the evils present in the asylum go far deeper than incompetent doctors and sadistic orderlies—there’s something terrible lurking in the depths of the asylum, something that demands sacrifices, something that must be stopped if they’re to survive.

Joschko’s strengths are in characterization and world building. He’s an engaging wordsmith and I found myself easily absorbed in the story. I’d have liked to see Joschko dial up the weirdness factor even further, but what we see in The Fever Cabinet is certainly satisfying. Great atmosphere and tension throughout. Recommended.