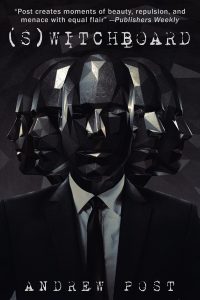 At an unspecified time approximating the present in the Rust Belt dystopia, desomorphine, a semi-synthetic opioid first patented in 1922 in Germany, has become all the rage among illicit drug users. On the streets the drug is called krokodil (it’ll eat you up, man) and has a reputation for leaving necrotic patches of decaying flesh on its users. Someone has seized upon the marketing ploy of mixing the drug with belladonna, and police lieutenant Dwayne Spare is pretty certain he knows who the culprit is – Gerald Metzger. Metzger smugly evades all official attempts to pin the drug trafficking charges on him, so Dwayne creates a false persona, Dan Owen Wells, and goes undercover.

So begins Andrew Post’s nightmarish cosmic horror novel Switchboard. This is a sojourn through a dreamlike landscape populated by desperate junkies, a murderous child, a wheelchair-bound criminal surgeon, a cold-blooded landlord in charge of sweeping things under the rug and, at the center of this hellish web, an alleged chemist who’s made a careless pact with … something … to ensure he’s able to continue his craft uninterrupted … forever.

When making a story pitch to a Hollywood studio, traditional wisdom says compare your project to two known successful films. With that strategy in mind, a good pitch for  Switchboard might be “It’s Aronofsky’s Requiem for a Dream meets Lynch’s Lost Highway.” It has the narco-centric desperation of the first, and the unpredictably devastating implausibilities of the second.

As Dwayne/Dan settles into his new digs, the reader is introduced to Jack Cotard and Constance Wieczne. Jack’s a hardcore user in over his head, eager to become a mule to stay in Metzger’s good graces and get the drug he craves. Constance is a sharp-tongued paraplegic surgically installing ‘pockets’ into Jack’s body so he can carry drugs into Canada undetected. Jack’s primary concern is to not fuck up like his friend Ryan, who lost an arm after disappointing Metzger. Connie doesn’t want to make waves. She does what’s asked of her in exchange for her dose of krokodil, but she can’t let go of the nagging realization that some of the shit she’s experiencing simply doesn’t make sense. For instance, she never runs out of wine. A biblical-style miracle, or something much more sinister? Of all the characters in the book, Constance is by far the most wonderfully conceived and executed, lingering in the reader’s mind, evoking sly humor as well as heartbreaking tragedy.

One-armed Ryan spends his days ‘dreaming’ for the boss, pretty much completely neglecting his son Sam. Sam’s not his biological child, but in the convoluted manner of all transactions in the junkie community, the boy has become his by default. Sam watches cartoons and witnesses every weird event that transpires in Dunsany Arms, often pointing his finger at the other tenants in a mock representation of shooting them, Dirty Harry-style.

Metzger operates from the top floor of the apartment building, a low-rent Howard Hughes running his criminal empire in reclusive near-anonymity. Dwayne/Dan has been assigned a room on the third floor where the previous tenant discharged a shotgun blast into his own mouth, after which the place was not exactly thoroughly cleaned. He needs to figure out a way to get surveillance devices he stole from the police evidence room into Metzger’s pad and collect some solid evidence.

Andrew Post is well-versed in supernatural literature and contemporary magickal history, peppering his book with names like Dunsany, Crowley, LaVey and Spare. This story unfolds in the manner of a dream shared by junkies Jack and Ryan, surgeon Connie, cop Dwayne/Dan, landlord Leslie, and hapless child spectator Sam. The only perspective we never receive a real glimpse into is that of Gerald Metzger, the chemist/alchemist/wizard at the center of this nightmare vortex. Post’s prose is packed with memorable horrors, as evidenced by this passage: The swirling blackness bled color—tendon-yellows and gristle-pinks—as the being vomited itself piecemeal into this world. The ripping tempest of void-regurgitated viscera snapped together, forming a boulder of amorphous anatomy.

The reader realizes early on that Dwayne/Dan has little more than a snowball’s chance in hell of achieving his policeman goals. He has no real authority here, in this place where space, time, and natural physical laws have been suspended. Like a good cop, he keeps trying, despite the fact that his efforts only bring him pain and drag him deeper into a mystery he can’t begin to fathom.

If there is anything missing from Post’s vision, it’s probably a positive set of experiences to which the reader could compare and contrast the depravity found in Dunsany Arms. At the onset, Lt. Spare’s life is shithole. He’s got nothing good to remember, nothing worth having that he might possibly escape to. As the caretaker, Leslie, comments in the final pages, “Your wife’s been out of your house for two years. At no point since then has she entertained the idea of coming back. And Jamie, sweet as she is, is going to be fine. Besides, you never really wanted a kid anyway.” Do we care that Dwayne is sucked into a black hole from which there is no escape? Maybe. Either way, if the reader has seen and enjoyed Resolution and/or The Endless by filmmakers Justin Benson and Aaron Moorhead, chances are they will want to read Switchboard by Andrew Post.