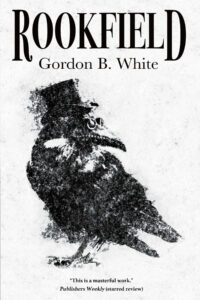 Rookfield is a chilling, quick novella that’s perfect for reading while in the midst of a global pandemic. I’d go so far as to say that, given Rookfield’s themes of mask-wearing and disease, this is a book that could only have been written during a pandemic in which we have all been asked to wear masks when venturing outside of our homes.

Rookfield begins with wealthy businessman Cabot Howard pursuing his ex-wife Leana and son Porter from the big city where they live to the tiny, insular town of Rookfield, where Leana has family. Ostensibly, Leana is fleeing the virus, but her ex-husband suspects that there’s something more going on, since she won’t respond to his messages or allow him to see their son. Cabot is a fish out of water: he’s not used to being told no, and his dove white Maserati immediately marks him as an outsider in the rural community, as does his unwillingness to wear a mask. At first, he’s simply forgotten to bring a mask with him in his haste to depart but then he stubbornly digs in when every gas station attendant and deputy sheriff he encounters demands that he don one before they will communicate with him.

Cabot is not an especially likeable fellow, at least at the outset, but White’s characterization of him is so engaging that even a know-it-all jerk becomes a sympathetic figure when presented with the sheer strangenesses of Rookfield. And Rookfield is a profoundly weird and violent place, filled with obnoxious locals, plague-doctor-mask-wearing children, and mysterious goings-on.

By no means will I spoil what is ultimately going on in the town of Rookfield. I will only say that I found it satisfying and horrific, and I couldn’t help but see parallels between Rookfield and Ligotti’s “The Last Feast of Harlequin.”

Rookfield is rich in characterization, atmosphere, and existential dread. White’s storytelling skills are on fine display here—while this was my first exposure to his work, I plan to seek out more of White’s fiction based purely on the strength of Rookfield. This is truly a story for our times. Highly recommended.