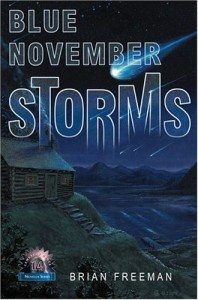 Brian James Freeman is not only the author of The Painted Darkness, More Than Midnight, Weak and Wounded, and Black Fire; he’s also the Managing Editor of Cemetery Dance Magazine and the Publisher of Lonely Road Books.  Having already read a large portion of his published fiction, I dare say he should be writing full time and making a damn good living at it, too.  I’ve been impressed with all of Mr. Freeman’s novellas and short stories.  This man knows how to write a damn good story that’s both subtle and creepy as the devil sneaking silently up behind you.

Blue November Storms, a novella, is no different than his previous works.  The reader immediately finds himself hooked within the first four paragraphs of the beginning chapter and must continue to read into the next chapter, or else find themselves standing up and shouting wildly at the Gods for teasing the living daylights out of them.  I started reading this long story while riding a bus to my bank on Friday afternoon and had it finished by the time I got off and ambled my way across the street to the bank doors.  I don’t even remember the bus ride to the other side of town, but I do remember every single page of this book and its gripping tale of destiny and life’s woes.

The story begins with five men lying on the roof of the cabin they built together as teenagers, waiting for a blue meteor shower to rain across the black, star-filled sky above them.  The town knows them as the “Lightning Five,” which is due as much from their fame as high school football players as it is from an incident that took place during their teenage years—an incident only they know the truth about and one that still haunts them to this very day.

One member of the group, who feels the most remorse for the incident, left his life behind for several years with little in the way of goodbyes.  The other four men thought Adam was dead, until he called one afternoon and stated he was coming back home for good and that they needed to meet him at the cabin so things about that eventful day could be talked out.

Bringing their wives and families and leaving them at the campsite on the other side of the lake, the four men meet Adam at the cabin and are soon reminiscing about old times.  That’s when the meteor show begins.  At first the shower holds them spellbound with its blue flashes of light whipping their way through the sky.  Then, meteors start crashing down around the cabin, nearly killing them in the wake of massive destruction.  You see, what’s beginning to happen is only the tip of the iceberg.  Nothing is as it seems, and soon the five friends will be fighting for their very lives as a clearer understanding of what they and mankind are facing quickly prevails.

I should point out that what the reader expects to happen within the early stages of this novel, doesn’t.  This is certainly one of Brian James Freeman’s greatest gifts as a writer.  He leads you down one path, clearly expecting something to spring out at you from one particular direction, and then pulls the rug completely out from under your feet with an astonishing twist.

I have to admit that what Blue November Storms reminded me of was one of the old episodes from the sixties’ version of The Twilight Zone television series. This is when some of the greatest writers in television (Ron Sterling, Charles Beaumont and Richard Matheson) were creating masterpieces on a little known TV show that would later alter the lives of hundreds of future authors.  Brian James Freeman, like the authors above, creates and structures his stories at a pace that starts off slowly and then gradually works its way to an exploding climax that has the reader making a mad dash to the finish line.

Great characters, great storyline, a surprising twist, and great writing are what Brian James Freeman is all about as an author.  All of these strong elements couldn’t be more evident than within the confines of this wonderful, exciting story, Blue November Storms.  Buy it, read it, and then check out Mr. Freeman’s other pieces of short fiction and see if you don’t become an avid fan.