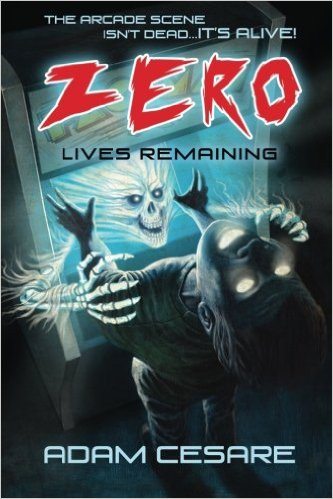 With video gaming, horror, sci-fi elements, and human emotions all whipped together into one tasty concoction, Zero Lives Remaining is a lot like the arcade that it’s set in. This fast paced novel keeps picking up speed until the grisly conclusion. But is it the conclusion? The clever epilogue gives reason for us to think otherwise.

The prologue of the story starts in 1989. Robby Asaro is carefully putting together another delicious pizza at the Funcave video gaming arcade in New Hampshire. Life is good. The arcade is busy with families, birthday parties, and teenagers eager to try out each new game that arrives. After a history of crummy jobs, Robby is: “content with his place in life and feeling at one with the Zen of the arcade.” He’s even made peace with the huge and difficult to operate automatic pizza oven. Or so he thinks. In a freak accident, Robby gets yanked into the oven and baked into a crispy people-roni pizza. An ambulance takes his burned up body away from the Funcave, but his spiritual presence sticks around. It is his favorite place to be, so why not? Robby learns how to move about like electricity and he enjoys inhabiting the video games while people play them.

Robby is still at the Funcave in 2014. He’s remained pretty much the same, but the world outside has changed. Most folks have home gaming systems, multi-media tablets, or smartphones that do everything except wipe your ass. Modern times are not good for arcades. Especially in this germ freak world we live in. Nobody wants to touch a joystick that’s still warm and has traces of pizza grease on it or deal with the erratic behavior of vintage electronics. Only the faithful still come to play their favorite games. Along with them are a handful of teenagers who don’t fit in. At the Funcave, they find “their” machine and settle in to get some of that Zen learning. One girl named Tiffany is smitten with Ms. Pac-Man and Robby is enjoying watching her play it. Then Chris shows up and ruins everything.

Chris Murphy is the kind of person who joins a white supremacist hate group. He labels and hates blacks, Koreans, and people with physical defects. Prime terrorist material stuck in a mellow small town without any clearly defined targets. Chris’ nasty attitude covers the fact that he was raised by an abusive redneck parent who never encourages him to grow. He sets his sights on Tiffany and attempts to win her affections by put downs and physical violence. Robby tries to protect Tiffany by causing the Ms. Pac-Man game to malfunction. Not a quick learner, Chris keeps pushing Tiffany until Robby is forced to kill him.

Unfortunately, instead of being a solution, that just makes everything much worse. Soon Robby’s energy is doubled and infused with Chris’ hate. This causes all kinds of major malfunctions at the Funcave. In a short period of time, everyone is getting horribly injured and dying. There’s no escaping the ectoplasmic tentacles or the building. The Funcave and everything in it ends up burning down. End of show. Or maybe it isn’t.

The epilogue brings us to the present day. A man is excitedly accepting the shipment of one Ms. Pac-Man machine that he purchased for his personal game room. It’s the only surviving piece of arcade equipment from a place in New Hampshire that burned down a few years back…

This book is a great read for all of us who’ve been able to frequent arcades like the Funcave. For those who did not, the specific game references will probably be lost on you. However…NO WORRIES! It really does not matter either way as to how the story functions. The story line is pretty strong and the book reads fast. I started reading with the plan of not liking the book, and came away from it with a much more positive view. Give Zero Lives Remaining a try — you’ll like it!